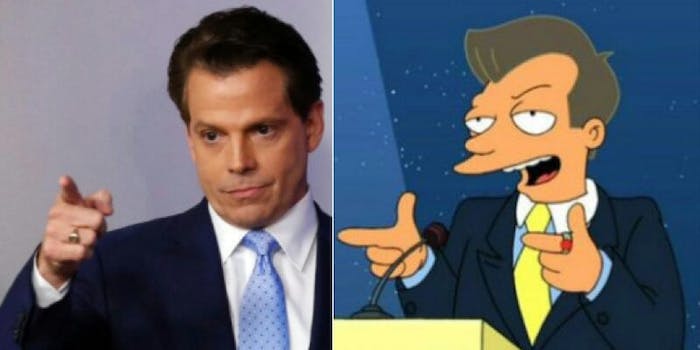 Is Anthony Scaramucci the business guy from ‘Futurama?’

Get ready to see a lot more of "That Guy."

If you thought the mockery of President Trump’s mouthpieces would stop just because Sean “Spicey” Spicer has left the podium, think again. Donald Trump’s new director of communications, Long Island bro-dude Anthony Scaramucci, projects the distinct feeling of being a TV character. Some say he’s basically an extra from The Sopranos, others that he looks like Real Housewife Bethenny Frankel. But the largest and most correct group is comparing Scaramucci to “That Guy,” Futurama‘s caricature of a 1980s businessman.

“That Guy,” a.k.a. Steve Castle, spoofs Michael Douglas as Wall Street icon Gordon Gekko, of “greed is good” fame. But The Mooch doesn’t bring Gekko to mind—he’s more like the cartoon.  Look at that hair!

Scaramucci is the 80s guy from Futurama pic.twitter.com/8ohqILqj7O

People are working the line into their Scaramucci jabs now, too.

Jake Tapper: Would you have taken that meeting?

Don't you worry about Russia let me worry about blank I also would have accepted Russia, Russia! You're not looking at the big picture pic.twitter.com/ej24fG2e7X

“That Guy” is also known or having boneitis, a deadly fictional disease that he never bothered to cure because he was working too many hours. As far as anyone knows, Scaramucci is not suffering from boneitis.

There are literally hundreds of people making the same Futurama/Scarmucci jokes (Moocharama jokes, if you will) on Twitter. A handful of Tumblr posts about the Scaramucci/That Guy connection have also collected thousands of notes each. Combined with media coverage from BuzzFeed and the Washington Post, among others, this meme has well and truly arrived.