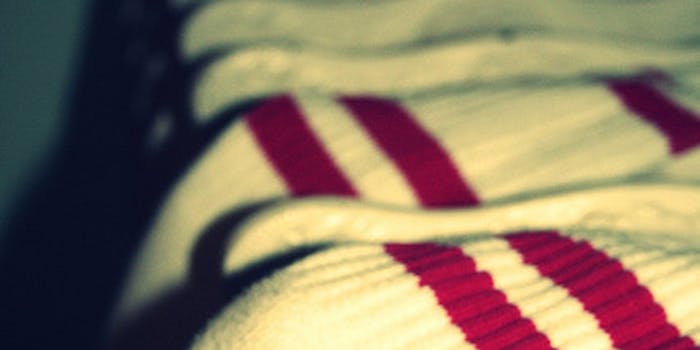 Remember the cop who bought the homeless guy a pair of boots? This is like that, but cheaper.

Remember the cop who bought the homeless guy a pair of boots? This is like that, but cheaper—and you don’t have to wash the feet of the poor if you’re not quite up to going full Jesus on the least of your brothers.

If you think the hacktivist collective Anonymous is nothing but a punishment brigade, #OpSocks might change your mind.

“Anonymous has always tried to help those that can’t help themselves,” @TheLulzDeptxx wrote on the Pastebin page announcing the campaign. “Homeless people aren’t asking for help but they desperately need it. It is come to our attention that socks are very important to helping homeless people stay healthy on the streets.”

Seattle’s Union Gospel Mission hands out over 15,000 pairs of socks every year, about 50 pairs per day.

Helping out, the organizer writes, “would mean a great deal to not only the homeless people but to the thousands of volunteers that help the Union Gospel Mission every year.”

The op is asking that Anonymous members and others visit the Union Gospel Mission’s website and buy six pairs of socks for about $10 via Amazon, which will send them to the mission.

Alternatively, you can buy the socks yourself and send them to the mission yourself.

The op seems to be capturing the imagination of folks on Twitter, who are gathering around the #OpSocks hashtag. It’s simple in concept and execution and it’s something virtually everyone can agree is a base-level decent thing to do.

“If you want a better community surrounding you, it is imperative to work towards making it better,” said @TheLulzDept.