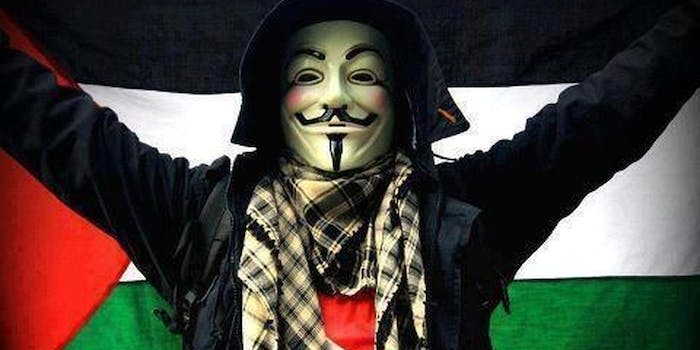 On Saturday, hacktivist collective hosted its most successful tweetstorm to date, #OpBOYCOTTIsrael.

In July, the European Union proposed a ban on providing financial assistance to Israeli organizations in the West Bank and the Gaza Strip—a move Secretary of State John Kerry urged the E.U. to postpone. Last month, the Palestinan Authority reached out to 50 countries around the world to apply economic pressure to companies with business dealings in Israeli settlements.

On Saturday, hacktivist collective hosted its most successful tweetstorm to date, #OpBOYCOTTIsrael, in which it provided “70 tweets with images and articles that promote boycott and divestment, expose Israeli war crimes and crimes against Palestinian children, and call out companies who profit off Israeli apartheid.”

By flooding a given Twitter hashtag, Anonymous makes its point of focus trend globally, helping raise awareness through sheer ubiquity and curiosity. This particular tweetstorm was nearly a week in the making. A Pastebin document detailing the objective was released Nov. 4.

The long-term goal is to encourage citizens everywhere to use the so-called BDS techniques—boycotts, divestment, and sanctions—to to “undermine the cash that bankrolls Palestinian oppression.” It’s an ambitious aim, but BDS techniques have been successful in the past.

“A growing number of religious and political projects across the planet are embracing disinvestment as a form of economic pressure against Israeli occupation of Palestinian land,” reads a second, much more extensive Pastebin document. “Disinvestment works – the strategy played a potent role in dismantling apartheid in South Africa and it can work to dismantle Israeli apartheid in Palestine, too.”

The second Pastebin document also contains resources for Palestinians in Gaza who have had their Internet cut off in the past (remember #OpIsrael?), including links to a dialup supplier of choice in emergency situations and a guide to dealing with the media and generating coverage.

The tweetstorm was unusually disciplined and launched massively. The hashtag clocked up 22,301 tweets in its period of activity. The hashtag trended worldwide briefly, and the related #FreePalestine trended for several hours. Here are a few samples of the tweets shared.

Protesters also pointed up the “7 29” identifier on barcodes, which shows that Israel is the point of origin of a product, and encouraged a boycott for such products.

You guys have no idea how happy I am that #FreePalestine is trending worldwide!

We’d like to thank everyone who participated in #opBOYCOTTisrael!We may’ve had an hr long twitstorm but the fight continues! #FreePalestine

According to Tweetreach, the #opBOYCOTTisrael hashtag boasted a reach of 70,000 accounts at its peak.

Correction: The barcode number Anonymous identifed was “7 29,” not “7 92” are previously reported. We regret the error.