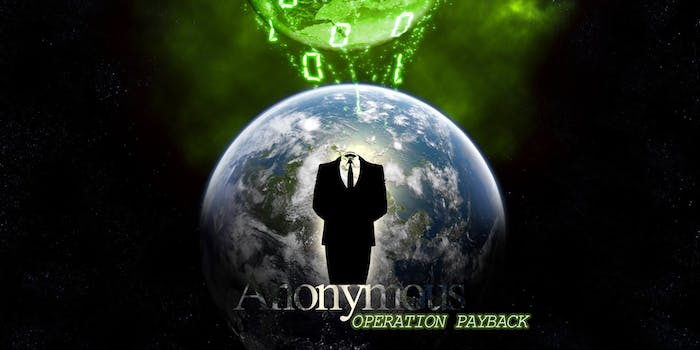 Hackers appear to be attacking several sites in response to the Federal goverment's take down of file-sharing site Megaupload.

It appears as if Anonymous has struck a variety of copyright-related sites today in retaliation for the feds taking down the file-sharing service, Megaupload.

The site justice.gov was the first to go down due to what appears to be a concentrated Distributed Denial of Service (DDoS) attack, and at press time, riaa.org, mpaa.org, copyright.gov, bmi.com, universalmusic.com, and France’s copyright site hadopi.fr were not loading properly, either.

Anonymous members and supporters were sharing the news of each site’s inability to load via Twitter and the hashtag #OpPayback and #opmegaupload.

According to Twitter chatter amongst Anonymous accounts and supporters, the sites fbi.gov, whitehouse.gov and Universal’s French equivalent were taken down, but those sites were still up at press time.

The Next Web pointed the finger at AnonOpsSweden, which shared the first tweet with that hashtag two hours ago, which could be construed as taking responsibility:

Chatter amongst members of Anonymous is far from unanimous, however, and the Daily Dot’s sources cannot confirm whether Swedish Anons are actually responsible.

“#oppayback isn’t new. It’s been a copyright-related operation from the start, so they could just be using that hashtag because it’s related and saying lol check it out these sites are down” said a prominent Anon to the Daily Dot via private messages.

“Someone mentioned that they heard it’s taking some packets though,” an AntiSec Anon told the Daily Dot regarding justice.gov. (Packets refer to the DDoS attack, in which packets of information are sent en masse across the Internet in an attempt to overwhelm a site and keep it from operating ) “From what I hear it’s the Universal site, justice.gov, RIAA, and possibly also MPAA sites are being hit,” he or she added.  The AntiSec member was not part of the DDoS attack, saying DDoSing “is not my style.”

According to CNN reporter Amber Lyon’s Anonymous source, more than 27,000 computers are involved in the attack with the average participant doing it from “their living rooms.”