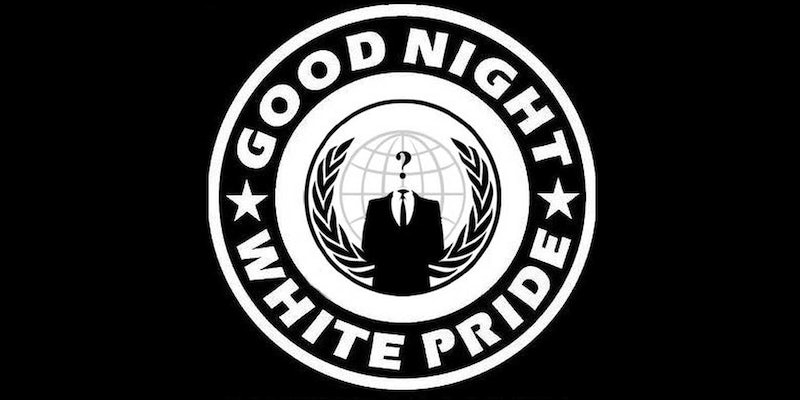 So declares the website Nationalist.org, a white supremacist site for the Nationalist movement founded by the late Richard Barrett, a key figure in the racist Skinheadz group. Yes, it’s been hacked by Anonymous, specifically the #OpAntifa sub-group. The deface is ongoing and active at the time of publication, although it applies only to the main page. The forums are fine, if somewhat tumbleweed-filled.

Warning: there IS autoplay rap music! although thankfully the Anonymous hackers responsible were kind enough to make sure they didn’t set the YouTube to loop. The video shows rioters versus police in a variety of locales including Germany.

And what treasure trove of cultural wisdom has the world lost with this deface? The Nationalist organization was primarily known among the general public for protesting Martin Luther King Day, and for the checkered reputation of its founder. According to a 2002 discussion in the Stormfront forums:

“I’d classify them as ‘Nationalism-Lite’—White Nationalism, but with too many foolish guidelines that make NO SENSE whatsoever. For example, their target audience are ‘Skinheads,’ but they are against ‘Symbols of Nazism or Hate’… (If your TARGET audience are Skins, why the hell would you tell those Skins not to display Nazi symbols?)”

“Essentially Nationalist.org is America’s version of the National Bolshevik party of Russia. A collection of nutballs with strange personalities and alternate versions of history. I also believe that Nationalist.org claims that they started the skinhead trend in America. What a joke.”

Then the founder of the forums stepped in to state that Barrett had a Jewish father and was very possibly a kiddie-diddler, and that was that as far as Stormfront was concerned.

Given that the Nationalist founder died (in a lurid murder) almost four years ago, and that the freshest entry in their forum is several months old, it seems that Anonymous has once again gone after some low-hanging fruit, a website that hadn’t been updated and secured properly. It is none the less an impressive deface, and has been up long enough that Google’s cache of the site shows only the deface as well; either the hackers did this some time ago unnoticed or they cleverly pinged Google to crawl the site and wipe out the snapshot of the site which had been stored on its servers. RawStory reports that the hack was done Friday afternoon, so that would mean the latter if true.

Supporters of #OpAntifa claimed the kill and posted the predictable polemic in Anon-approved style. #OpAntifa is a Greek anti-fascist op that has taken action in the past against the notorious Golden Dawn fascist party in Greece and supported anti-fascist actions elsewhere. Interestingly, the deface quotes American activist Jason Hammond, brother of imprisoned Anti-Sec hacker Jeremy Hammond; this would appear to be an international endorsement of Hammond’s status among Anons and anarchists as a political prisoner.

We, as antifascists, and as Anonymous, refuse to give any quarter to fascists on our internet, as we have seen time and time again that they are like a plague, or a fungus, and when allowed to live in peace only multiply, and steal peace from those who would like to have no hatred for them.They spread their malice through children and adults alike.

To counter this vile ideology, we present a quote from our own dear friend, and brother of Anarchaos, Jason Hammond:

“Everyone  deserves a fair opportunity to lead a good and meaningful life and at  the moment we have a long way to go before this is achieved. Sometimes  we cry, other times we rejoice, but we must rise to the challenge and  work through these difficult endeavors to create a beautiful and free  society.”

This fight has been underway for many years. We used to use Boots and Batons, now we use virtual tools. Weapons have changed, not resolve. It does not end, or take breaks. We will take all actions to eradicate white pride from every corner of our world, physical and virtual.We will strike at all who support, promote, spread or hold fascist ideals, and we will do so with all of our strength, which is a great strength. Free Jeremy Hammond. Free the Tinley Park 5 and all other antifascist prisoners of war.

A glance at the sourcecode for the web page reveals the interesting addendum:

The kind of beast that keeps fascist tech support up at night.