What does Google Chairman Eric Schmidt have in common with Internet vigilante pranksters Anonymous? Both want to see the proposed PROTECT IP Act — currently meandering its way through Congress — fail to become law. Schmidt calls the proposed law  “disastrous precedent” for freedom of speech, while Anonymous members (closely linked with the website 4chan) have called on their Internet compatriots at Reddit to take action by participating in a Distributed Denial of Service attack (often called a DDoS) against the U.S. Chamber of Commerce, a long standing non-governmental institution and lobbying voice. 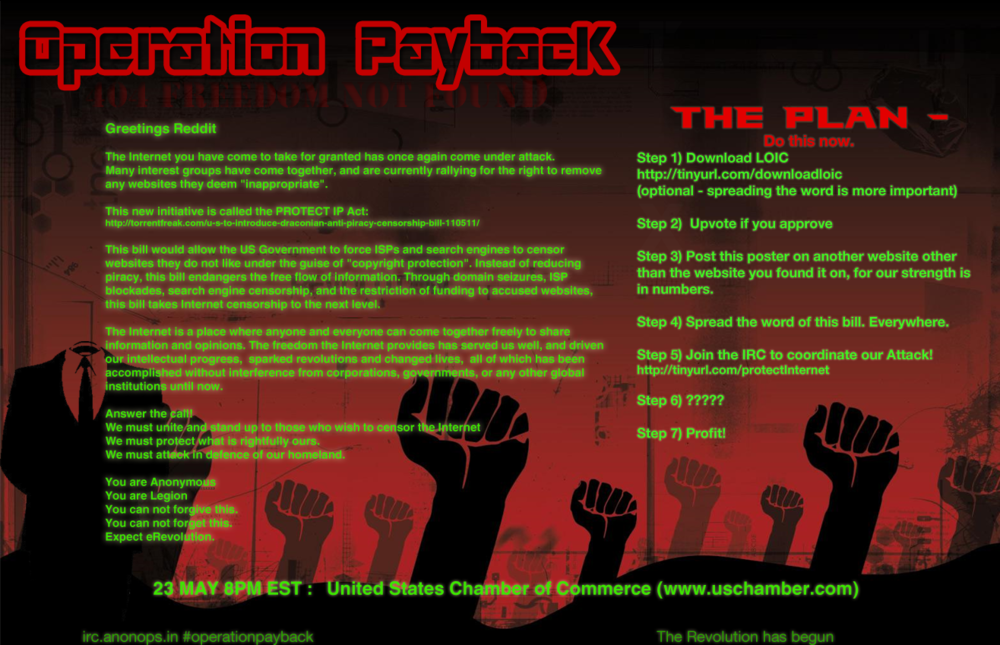 As of 3:30pm Eastern time the website for the U.S. Chamber of Commerce was still up and responding to browsers with no noticeable ill effects. A successful DDoS attack would potentially make the Chamber’s website unavailable to Internet users.

The PROTECT Act — short for PRevent Online Threats to Economic Creativity and Theft of Intellectual Property — would give the U.S. Government, as well as Copyright holders, sweeping new powers to remove domestic domain names from the Internet and pursue civil actions. Additionally, the PROTECT IP Act would also codify the U.S. Government’s ability to usurp and seize “nondomestic” domains deemed “dedicated to infringing activities.”

Opponents of the bill point out that removing DNS records (equivalent to creating an unlisted phone number on the Internet) does little to combat actual IP crime and creates a very slippery slope for the future by establishing a precedent under which U.S. authorities could potentially silence other websites.

Many Reddit commenters were quick to point out that following this call to action could result in legal liability. Howcanitbealright points out a much more sane course of action, “If you want do actually do something you need to write your representative. […] You need to show that this is a big deal. Get the media involved”, adding “Show that you’re going to vote.”

Update (5/26): Senator Ron Wyden (D-OR) has personally placed a hold on this bill, as he did with a similar measure last year. In a public statement about the hold, Wyden makes some very strong arguments and shows a remarkable understanding of the Internet (at least for a Senator!)

The Internet represents the shipping lane of the 21st century. It is increasingly in America’s economic interest to ensure that the Internet is a viable means for American innovation, commerce, and the advancement of our ideals that empower people all around the world. By ceding control of the Internet to corporations through a private right of action, and to government agencies that do not sufficiently understand and value the Internet, PIPA represents a threat to our economic future and to our international objectives.