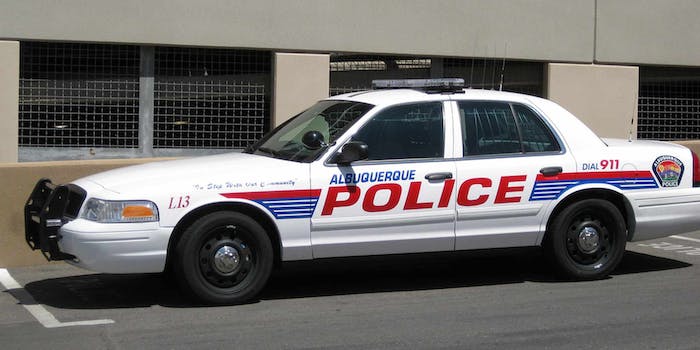 But it's still not as painful as the $24 million in miscoduct lawsuit settlements.

Late in the evening, a dox appeared on Pastebin, revealing the home address, phone number, and other details, allegedly belonging to the officer accused by many of murdering James Boyd, a homeless man, in the Sandia foothills. The dox, belonging to Officer Keith Sandy, also provided his date of birth, email, and a secondary address. By Monday morning, the dox had been shared by about a dozen Anonymous accounts on Twitter.

Sandy appears in the now infamous video depicting APD officers firing stun guns, bean bags, and eventually six live rounds at Boyd and ending his life. In response to the public outcry, the Federal Bureau of Investigation announced on Friday that it had launched an investigation into the police-involved shooting.

Officers claim Boyd threatened them with a small knife and was uncooperative at the end, but the video has cast doubt on those claims. There were instances in which it is clear that Boyd is in distress and seems in need of assistance by a qualified mental health professional. Regardless, one was not called to the scene. APD dispatched officers in bulletproof vests equipped with military-grade weaponry instead. Information now public concludes that APD was aware of the mental problems suffered by Boyd and had been informed he was a reported paranoid schizophrenic.

In the video, Boyd appears to be gathering his belongings and cooperating with officers just before he’s hit with a live round.

As Sunday’s protests in Albuquerque reached the 10th hour, teargas was deployed by riot control officers, apparently on the orders of Albuquerque Mayor Richard Berry, who characterized the demonstration as “mayhem” while speaking with reporters. The protesters were accused of trapping officers inside of a vehicle and trying to smash out the windows.

“We want people to be able to protest,” Berry said. “Obviously, they have their First Amendment rights to do that. But what it appears we have on our hands now is, a small group whose main goal is not to protest, but to put the public and themselves in danger.”

Before the protest ended, several journalists at the scene turned to Twitter to report that they had been gassed by the police—a key detail left unreported by the affiliates they worked for:

The crowd has dispersed. I’ll be attending to my still burning face now. #apdprotest #koat

.@KOB4 Photographer Dave and I were just slammed by tear gas on Central and Yale. pic.twitter.com/IYIO4cyJvB

I don’t understand how these local outlets can echo police propaganda after watching their reporters get tear gassed. #APDProtest

These protests follow years of U.S. Department of Justice investigations of the APD. The Albuquerque Journal reports APD has cost taxpayers $24 million since 2010 in misconduct lawsuit settlements.