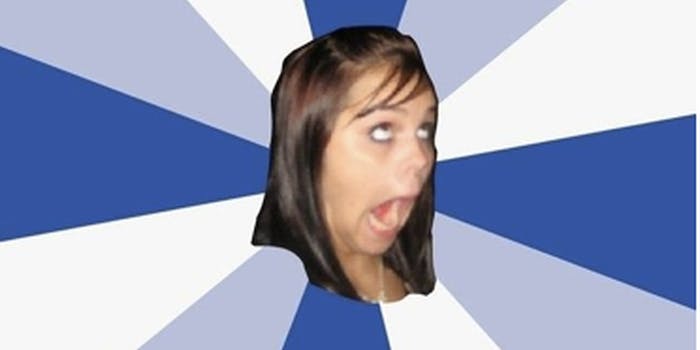 According to some redditors, meme's aren't mean; they're "fate."

It’s all fun and games until you discover you’re an Internet meme.

That very scenario might happen to a girl named Jess sometime today. A picture of her on Facebook was edited in order to create a meme: Annoying Facebook Girl. In this image macro, text about clueless Facebook practices surround Jess’s face.

Last night redditor boyann stumbled upon this familiar shot in one of his friend Megan’s photos. He immediately chatted with her (and took a screenshot) to tell her the news.

“whatt,” Megan replied after seeing the meme. “who did that??”

“nobody,” boyann wrote back. “the internet did.”

The redditor continued by trying to explain to Megan what a meme is. Unfortunately, poor Megan hadn’t heard of the concept.

When boyann posted the story to Reddit, commenters were mainly concerned about Jess’s feelings and worried that a person who’d never heard of memes might take it the wrong way.

“This could make her upset if she doesn’t understand Internet culture (which is a weird culture),” wrote andanteambrosino. “I think you should make sure she knows that it’s just a bunch of silly people making fun of an idea, not her — they just needed a goofy picture for it.”

“Tell her it’s not mean…it’s fate. She should be proud to be recognized by a vast majority of internet users,” wrote HobbytheWise.

In the original post, boyann promised to keep Reddit updated on whether Megan shares the news with Jess. He hasn’t updated the thread in nine hours.

His last update? An image macro of Conspiracy Keanu in defense of Jess:

“What if she is actually a deep, well meaning human being who honestly only has a Facebook because her close friend made her and is in actual fact kind of embarrassed by the false version of her the pic portrays. Then what Reddit? What will you do with your lies?”

Image from Know Your Meme