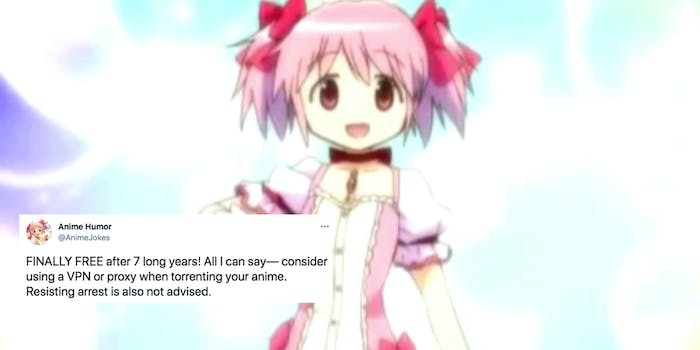 ‘FINALLY FREE’: Admin of popular anime account claims to have been incarcerated for 7 years

People are drawing comparisons to the Taylor Swift stan who went to jail for refusing to join the IDF.

After being silent on Twitter since 2014, the admin of the Twitter account @AnimeJokes returned to the site on June 8 alleging that they had been incarcerated for seven years for torrenting—or peer-to-peer, decentralized file-sharing—and resisting arrest.

The admin, whose bio advertises their account as “fun and clean anime humor for the enjoyment of you and all your anime friends,” revealed that using a virtual private network (VPN), or encrypting a public network to make it private, might have helped them avoid arrest and subsequent incarceration.

Many of @AnimeJokes’ 16,000 followers reacted in shock to the announcement and responded with memes, anime references, and, of course, references to a similar, infamous tweet from the now-defunct @LegitTayUpdates.

To manage the replies and messages they received, @AnimeJokes tweeted that they appreciated the “warm welcome back” to Twitter that they received, were staying with their father, and would answer further questions about their incarceration at a later date.

In the days since their return, @AnimeJokes tweeted about how anime and Twitter have changed since they’ve been gone, shared anime quotes, and asked for suggestions for up-to-date anime meme websites.

Shortly prior to their time in jail, @AnimeJokes posted tweets about a run-in with the law in 2014, which many are calling foreshadowing.

The Daily Dot has reached out to @AnimeJokes.