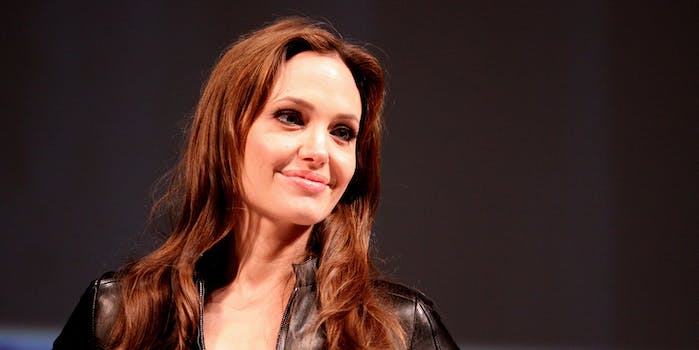 It's time to trust women.

Angelina Jolie has just announced via the New York Times that she underwent a surgery to remove her ovaries and fallopian tubes to address her increased risk of developing gynecological cancers. The decision has attracted widespread commentary, and it’s an important contribution to the ongoing discussion about women’s health and autonomy in the United States. Jolie-Pitt is an adult woman who can make her own informed choices, yet some seem convinced that she owes them her body—and her life.

The story follows on her 2013 decision to undergo a double mastectomy and breast reconstruction, a procedure she also wrote about for the Times. Medical testing revealed that she had a BRCA1 mutation, a genetic twist of fate that made her more vulnerable to breast and ovarian cancers. Her mother, grandmother, and aunt had all died of such cancers, making her acutely aware of the risk and the tragedy of being the family left behind.

“I am writing about it now,” Jolie said in 2013 after completing the series of surgeries necessary to remove and reconstruct her breasts, “because I hope that other women can benefit from my experience. Cancer is still a word that strikes fear into people’s hearts, producing a deep sense of powerlessness. But today it is possible to find out through a blood test whether you are highly susceptible to breast and ovarian cancer and then take action.”

Her decision to be frank about the details of her medical history and proactive steps sparked what some called the “Angelina effect,” as the Internet, and the world at large, started talking about breast cancer. The specifics of who should be tested for BRCA mutations and how they should handle such mutations was a particular topic of interest, particularly for those with close relatives who had died from such cancers.

However, unsurprisingly, it also underscored the fact that “we still see women as body parts,” as Carrie Murphy put it at the Gloss. Sexist commentary, mostly from men, crawled out of the woodwork to trash Jolie’s decision, with many comments implying a sense of entitlement and ownership of her breasts. Jolie said that she didn’t feel any less feminine or empowered because of her decision, but sexist trolls begged to differ.

So what happens if Angelina Jolie finds out she had a cousin that died from brain cancer?

What? Its a legit question? #AngelinaJolie

Does anybody REALLY GIVE A SHIT? Obviously all the world's problems have ceased to exist if this is making… https://t.co/pmk91dZccI

Most of Twitter’s analysis revolves around deriding Jolie for making a proactive medical decision based on detailed, thoughtful consideration, discussion of risks, and consultation with her medical providers. While leaping to conclusions is an issue that came up in 2013, when the incidence of people requesting testing for BRCA mutations and surgeries increased because Angelina Jolie publicized the issue, Jolie reminded people in this week’s editorial that it was critical to only make decisions about major surgery after carefully weighing the risks and benefits.

“I did not do this solely because I carry the BRCA1 gene mutation, and I want other women to hear this. A positive BRCA test does not mean a leap to surgery,” she wrote. “There is more than one way to deal with any health issue. The most important thing is to learn about the options and choose what is right for you personally.”

Her clear, unequivocal comments reminded readers that the science of genetics and cancers is complex. Even with preventative surgeries, Jolie is still at risk for cancer and needs continued screening and evaluation. And for other people with BRCA mutations, the risks and benefits will be different—making their medical needs different as well. One patient might benefit from a mastectomy, while in another, the procedure might not mitigate risks.

As in her 2013 column, Jolie discussed the surgery in detail, demystifying what happens behind the OR doors to clarify her experience and help readers understand what happened to her. She also discussed the aftermath, which in the case of oophorectomy is considerable. By removing the organs that generate progesterone and estrogen, Jolie essentially put herself into menopause and needed to choose between hormone therapy and other treatments.

She chose hormones, which she also discussed in the column—much to the relief of her male fans, surely, because she’ll remain “hot” even with her fake rack. But for her, this was a much more traumatic and serious surgery, not just because it forced her into menopause, but because it categorically removed her ability to have biological children in the future.

Jolie’s decision to be open about her cancer risks and how she managed them forced a discuss about an issue we’re often afraid to address, despite the push for breast cancer awareness every October. She opened up the ugly and frank truths of being alive with a genetic timebomb ticking in your chest, forcing you to make difficult medical decisions under a tight deadline. For Jolie, who had been planning the oophorectomy at some point in the future, that deadline came up short when her doctor informed her that inflammatory markers in recent bloodwork were a cause for concern. Catching ovarian cancer fast is critical, because it grows aggressively and is hard to treat.

For people with fewer resources, those markers might be more serious: a full-blown tumor, one caught much later because the patient couldn’t afford the routine and aggressive regular testing and followups Jolie was able to access. Angelina Jolie’s willingness to talk about her health decisions, though, opens up an environment where women can advocate for better cancer prevention care and better cancer treatment, including aggressive actions like this one when they’re merited. It’s also opening the door for more celebrities, like Kelly Osbourne, to open up about their cancer prevention treatments and continue the conversation. This isn’t just about one woman and one BRCA gene but about a world of women facing individual health risks.

Yet in order to do so, we must, as the late Dr. Tiller said, “trust women.” The inability to trust women to make informed and private medical decisions on the basis of all the available information and consultation with their physicians is a persistent problem in the U.S. It extends not just to Angelina Jolie’s breasts and ovaries, but also to women’s pregnancies, the push for birth control, and the demand for bodily autonomy from American women.

It’s particularly stark for celebrities, living in the public eye with bodies the populace seems to believe are there for their own consumption. Jolie and her body belong to no one but herself, even though the Internet might think otherwise. In the morass of vicious comments about a woman who was willing to talk about a procedure that many believe renders women less than whole, we are reminded of a pernicious part of American culture.

“I feel feminine and grounded in the choices I am making for myself and my family,” Jolie wrote in her Times column. It was a compelling rebuke to those who believe that gender is about anatomy, the genitals, and their arrangement: It’s really about how people identify. It was also a reminder that public figures have private lives and families, and the right to make medical decisions on the basis of what benefits them—not society’s desires.