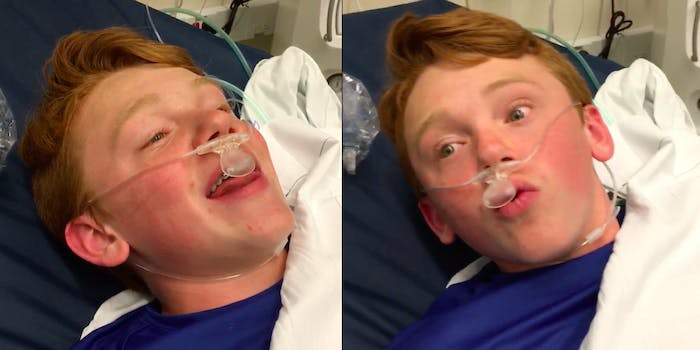 The expressions on his face are priceless.

Thanks to the virality of anesthesia video after anesthesia video, every person knows that if they’re going to be under the effects of the drug they better have a cameraperson ready to capture the expected outrageousness. And so comes the latest of the trend, this kid named Brandon coming out of anesthesia after getting his broken arm set.

He starts off setting a disclaimer, “Well, I’m sorry I can’t even think straight right now!” But that doesn’t mean that everything he says is any less hilarious. The best is when he starts talking about an alleged trip in Dubai, where he bought a camel in “the wicky wicky wicky west.” He also apparently had a “hot ass wife” and kids, so “Dubai was liiiiiiiiiiiiiiiiiiiiiiiiiit!”

And the best part? There were camels and strippers involved as well.

Billions of strippers, man. What’s also great is when Brandon’s camera person, who we’re guessing was his mom, gasps at the thought of her son getting a bunch of strippers. But the show must go on, and she must continue filming all these crazy antics.

You can check out the rest of Brandon coming out of anesthesia here.