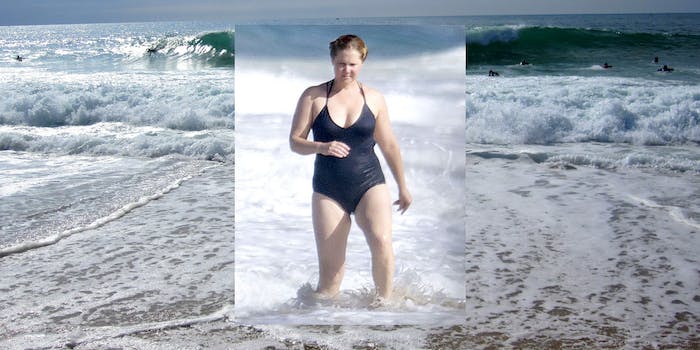 Amy Schumer, body shaming, and the struggle to be ordinary

It's not about looking 'beautiful.'

Attacks on women’s bodies are all too frequent on the Internet these days. Follow a plus-size model on Instagram, or click on a body-positive hashtag, and it won’t be long before you encounter vicious comments about what’s beautiful, who’s healthy, and how women are supposed to look.

But when Amy Schumer posted a paparazzi photo of herself in a bathing suit to Instagram this week with the self-mocking caption “BFG,” the notoriously brash comedian was shocked at the slew of nasty comments she received. Trolls picked apart her appearance and mercilessly attacked her body.

Rather than take down the photo, Schumer revised her headline, still infusing it with her trademark wit.

I meant to write "good morning trolls!" I hope you find some joy in your lives today in a human interaction and not just in writing unkind things to a stranger you've never met who triggers something in you that makes you feel powerless and alone. This is how I look. I feel happy. I think I look strong and healthy and also like miss trunchbull from Matilda. Kisses!

And fans were quick to applaud her for speaking out.

But amid the dialogue that sparked on Twitter, another pattern emerged. Not all fans were applauding Schumer’s reaction to her trolls. Many were eager to praise her looks, and they especialy wanted her to know that she looks “great.”

Um. You're gorgeous? What's their problem? (People can be dick-coated assholes. That's the problem.) pic.twitter.com/lq5ahPRMXl

you look wonderful and people are idiots!

you are absolutely beautiful, own it

While the messages are certainly well intentioned, they highlight an underlying problem with how we deal with body-shaming. The fact that Schumer was attacked at a physical level is awful, and it makes sense that fans would impulsively wish to comfort her by praising her looks. But when we rush to erase that harm by reassuring women they’re attractive, we reinforce the structures that allowed the attacks to take place in the first place.

If a woman did not deserve to be attacked because she actually did look beautiful, then her worth is still dependent on a set of physical values. By calling the victim of body-shaming “beautiful,” we unintentionally reduce her worth. We’re just reinforcing the idea that women must, without exception, be physically appealing at all times.

Schumer’s original Instagram caption is a direct mockery of that notion. “BFG,” which stands for Big Friendly Giant, is a cheeky reference to Roald Dahl’s well-loved children’s book about an enormous giant who befriends a young boy.

By calling the victim of body-shaming “beautiful,” we unintentionally reduce her worth.

Schumer has shared the BFG joke before. In her October HBO special, Schumer quipped that Hollywood’s beauty standards often render her body unrecognizable to onlookers: “My arms register as legs there. They’re just like, ‘Is that an octopus? I don’t understand…’ And my legs register as firewood. They’re just like ‘Why is the BFG on Sunset (Boulevard)?'”

The joke isn’t a cry for attention or flattery—it’s a send up of absurd beauty standards. In the Instagram photo, Schumer appears candidly wading through the waves in a black swimsuit, her hair tied back in braids. The photo is in neither overly flattering nor unflattering. In it, a famous comedian and actress appears altogether ordinary. And that, perhaps, is what’s so revolutionary about it.

In her revised caption, Schumer writes: “I feel happy. I think I look strong and healthy…” She doesn’t make any allusions to feeling pretty or attractive. She does not position herself as an object. Instead, she reminds us that our bodies possess essential qualities beyond aesthetic beauty. And her Miss Trunchbull reference is a wink to the fact that she knows we care deeply about beauty.

Schumer was on the receiving end of similar misguided compliments in April, when she called out Glamour magazine for including her in their “Chic at Any Size” issue. While Glamour maintains that they did not intend to label her as “plus size,” Schumer was alarmed to find that the magazine had included her as “inspiration” alongside talented plus-size women, including model Ashley Graham.

When Schumer posted about it on Instagram she asked her fans, “What do you think?” The response was wildly polarizing. Many were offended and said Schumer’s remarks was an implicit insult to plus-size women. At the other end of the spectrum was the chorus of fans crying out that Schumer looked much too fit and beautiful to be mistaken for plus size.

The body-positivity movement has long focused on giving “all bodies” a chance to be seen and accepted. But the bodies we’re shown in the media and on the Internet are frequently polished, highly stylized and glamorous. Models like Ashley Graham encourage women to feel beautiful and love the skin they’re in, but there’s an underlying pressure in these images. In order for a body to be acceptable, it seems, that body, no matter the size, still must be glamorous, sexy, and attractive.

What body-positive campaigns rarely offer is candid images of women like Schumer. Women who are neither runway thin nor plus-size glam are everywhere in real life. But images of women who look ordinary are scarce.

This is likely because women have been taught to hide images that are less than stunning. It’s a vicious cycle: The media lacks images of ordinary bodies doing ordinary things, and women in turn do not share ordinary images of themselves doing ordinary things. When fans tell Schumer she has nothing to be ashamed of, they’re ignoring just how shameful it is to be a woman at all.

In a recent Inside Amy Schumer sketch, Schumer examined what it’s like to be a woman looking for a simple piece of clothing in a boutique. When she requests a black t-shirt in a larger size, she is literally taken out to a pasture where she finds actress Lena Dunham and a cow.

The sketch is absolutely absurd in its humor, but it’s also an all-too-real metaphor for how little room society makes for women with ordinary bodies. Schumer has built a career, and a persona, on being a woman who irreverently embraces her own “ordinary” status. She goes from glam to sweats without batting a lash. When she does dress up for sophisticated events like the Met Gala, she often pokes fun at pressure to ready herself for such high-profile moments. While others were posting images of their hair and makeup teams, Schumer’s Met Gala prep moment was a selfie of her eating a scone.

Schumer’s revised “BFG” caption isn’t about looking beautiful or desirable. It’s about a woman embracing a photo of herself that others might deem unflattering or unfit for public viewing. While Schumer has graced many a magazine cover in full glam, here she’s just a woman living her life. And that may be the most subversive thing of all.

Nayomi Reghay is a writer, comedian and Upright Citizens Brigade Theatre performer. Her writing has been featured on Reductress, Femsplain, Mic.com and the Daily Dot. She’s also the host of What Have You Learned? a podcast about life and learning. For her thoughts on crying, cake, and baby animals, follow her on Twitter @nayomir.