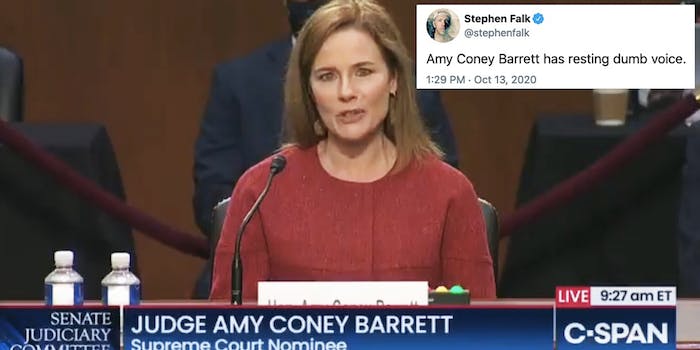 Tuesday kicked off the second day of Senate Judiciary Committee confirmation hearings for President Donald Trump’s Supreme Court nominee, Amy Coney Barrett. The Trump-appointed Seventh Circuit judge has been grilled by Democrats on a variety of pressing issues—from overturning Roe v. Wade to dismantling the Affordable Care Act—many of which, Coney Barrett has deflected or straight-up refused to answer.

Having a Supreme Court nominee “play dumb” about laws that can adversely impact millions of American lives is not even what people seem to be most upset about. It’s the woman’s damn voice!

Here, have a listen for yourself:

Coney Barrett’s “baby voice” could easily give Paris Hilton or Kim Kardashian a run for their money. And while that may be a quality we accept in reality TV stars, it’s not what many people seemed to have in mind for a woman who will ostensibly sit on the highest court of the land.

“Amy Coney Barrett has an awful little girl, up talking voice,” tweeted one user. “Amy Coney Barrett’s voice is what would happen if Gilbert Gottfried and Smurfette had a baby,” savagely added another.

Others were perhaps even less kind, roasting Coney Barrett’s seven-year-old girl” voice, among other criticisms.

If Amy Coney Barrett is approved for a seat on the Supreme Court, she will be just the fifth woman in United States history to do so. Unfortunately, instead of paving the way for more women like her, there are serious concerns that she’ll vote in major setbacks for women, the LGTBQ+ community, and others.