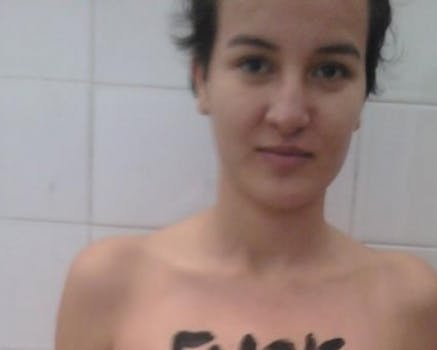 A Tunisian woman who was threatened with murder by stoning after she posted topless photographs of herself on Facebook is safe at home, her lawyer said, contradicting widely circulated reports that she'd been forced into a psychiatric ward.

A Tunisian woman who was threatened with murder by stoning after she posted topless photographs of herself on Facebook is safe at home, her lawyer said, contradicting widely circulated reports that she’d been forced into a psychiatric ward.

Amina, 19, posed in the photographs as part of a feminist protest organized by the Ukranian group Femen. In one image, Amina (whose last name is unknown) is shown reclining, topless and smoking a cigarette with the words  “my body belongs to me, and is not the source of anyone’s honour” scrawled across her chest in Arabic. In another she flips off the camera, this time with “Fuck your morals” penned across her torso in English.

News media widely reported that Amina had gone missing on March 16 after she appeared on the popular Tunisian television show Labes. In that appearance, with her her face blurred, she explained her rationale for joining Femen. The head of Tunisia’s  Commission for the Promotion of Virtue and the Prevention of Vice in Tunisia later called for Amina to be stoned to death, fearing that her brazen act had given other women “ideas” and might start an “epidemic.”

Meanwhile, to punish Femen Tunisia for the protests, hackers commandeered the organization’s Facebook page and littered it with religious exhortations and passages from the Koran. “The page has been hacked and God willing, this debauchery will disappear from Tunisia,” the hackers wrote in one post.

But Amina’s lawyer, Bochra Bel Haj Hmida, told an English-language Tunisian news site that Amina was never “missing” and “has never been in a psychiatric facility.”

Amina is with her parents ready to go back to living her life, her lawyer said:

Bel Haj Hmida, who is also a well-known Tunisian women’s rights activist, told Tunisia Live that Amina is going back to school and said that she needs to be left in peace. She declined to provide further details of Amina’s situation due to lawyer-client confidentiality requirements.

Amina’s protest and the brutality of the threats against her have struck a chord across the world. More than 80,000 people have a signed Change.org petition—launched by an Argentine—demanding that Amina’s “life and liberty” be protected and that “those who have threatened her will be immediately prosecuted.” On a Facebook support page, dozens of men and women have posed topless with the words “Free Amina” scrawled across their arms or chests or hands.