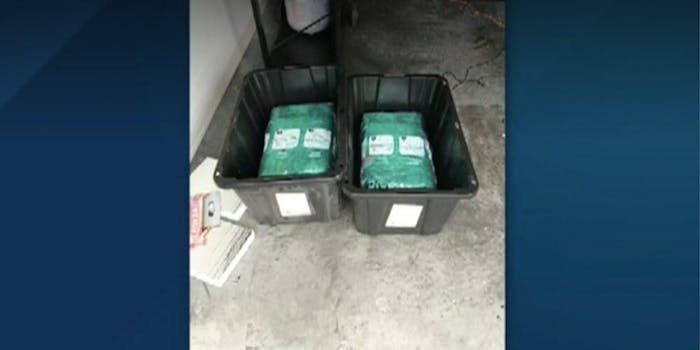 That's a lot of weed.

A Florida woman ordered four empty storage bins on Amazon.com, but when her package arrived, it weighed a lot more than she was expecting. That’s because storage bins weigh more when they’re stuffed with 65 pounds of marijuana. Oopsies! How’d that get in there?

The woman, who wanted to remain anonymous to protect herself and her husband, told Florida news station WFLA that as soon as she discovered what was in the package, she called Orlando police.

“When the first officer got here she was in disbelief,” the woman said.

Police confiscated the huge stash and began investigating, but they have yet to determine how the weed made its way into the tubs, which were shipped from an Amazon warehouse in Massachusetts. The customers bought the bins through Amazon Warehouse Deals, which is Amazon’s discount outlet for merchandise that’s been scratched or had its packaging damaged, preventing it from being sold as “new.”

Amazon hasn’t been much help either. After communicating with several customer service reps in an attempt to get an apology or an explanation, the couple ended up with neither. They did get a $150 gift card, though. Yay?

Fearing for their safety, the couple left their house for a few days after they received the shipment, the woman told WFLA.

“There was no concern for a customer’s safety. I mean this could have turned into a worst-case scenario,” she said.

Understandable, because they didn’t know whether the owner of the weed had access to their address and might come looking for it.

Even in Colorado, where marijuana is legal and in plentiful supply, wholesale prices average around $1,300 a pound. So a conservative estimate would put the Amazon stash at around $85,000, with its street value even higher. That’s one hell of a warehouse deal.

Update 7:40am CT, Oct. 25: When reached, an Amazon spokesperson said that “Our customer service team worked directly with the customer to address concerns and will work with law enforcement to investigate the case, as needed.”