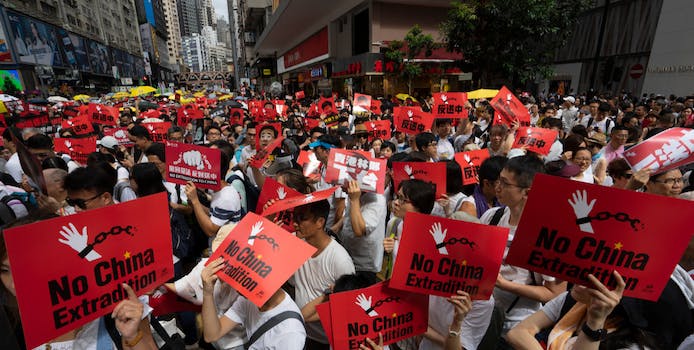 The protests in Hong Kong continue to spill over into the media world. First Disney films and now video games.

On Aug. 20, the International Dota 2 championships will begin in Shanghai. As qualifying group stages are heating up, the Twitch chats have been flooded with pro-Hong Kong posts, Kotaku reports.

Angered that the International will take place in China, sympathizers with Hong Kong’s plight have taken over the chat.  “FREE HONG KONG” reverberates through the chat, alongside Winnie the Pooh memes (a mocking reference to Chinese President Xi Jingping) and gorilla emotes accompanied by the phrase “Spam this King Kong to free Hong Kong.”

Hundreds of thousands of people are watching the group stages, providing a broad platform for the anti-Chinese sentiment.

Hong Kong’s population has inspired the world with mass protests against a China-backed extradition bill that many Hong Kongers see as a threat to their autonomy. Under Xi Jinping, citizens of Hong Kong believe the governing principle of “one country, two systems” is being eroded. The extradition bill is just one of a number of attempts at consolidating power by Beijing since Hong Kong was handed back to China from the British in 1997.

Valve, the developer of Dota 2, committed to hosting the event in Shanghai long before the unrest in Hong Kong ignited. However, the company has increased its presence in China in recent years and this has led some to suspect moderators of aggressively policing political language on the chats.

As protests in Hong Kong continue and the Dota 2 International approaches, political tensions will likely continue to mount in the chats. Though the tournament has yet to be played, the old truism that everything is political remains undefeated.