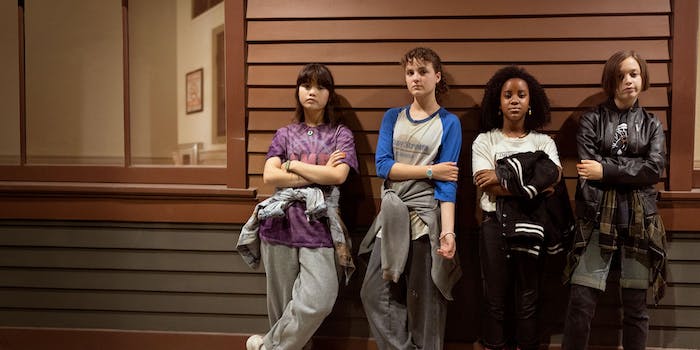 This thrilling and well-observed comicbook adaptation follows four 12-year-old girls who travel from 1988 to 2019.

Adapted from the comic by Brian K. Vaughn and Cliff Chiang, Paper Girls is a gem—a sci-fi/adventure show that balances epic worldbuilding with an insightful and moving coming-of-age drama.

Starting out in 1988, the four main characters are paper delivery girls: 12-year-old newbie Erin (Riley Lai Nelet), ambitious nerd Tiffany (Camryn Jones), shy rich girl KJ (Fina Strazza), and angry tomboy Mac (Sofia Rosinsky). After forming an unlikely alliance to escape some bullies during a pre-dawn paper run, they get sucked into a time vortex that drops them off in 2019. Not only are they trapped in the future, but they find themselves caught up in a time-travel war between confusing factions of murderous adults.

Considering the current glut of 1980s nostalgia media, Paper Girls runs the risk of seeming like more of the same. But while comparisons to Stranger Things are inevitable, the similarities are more superficial than they appear. Both shows take inspiration from classic 1980s adventure movies, and both star a group of kids getting sucked into an interdimensional conflict. However, Paper Girls is largely disinterested in cheap nostalgia—and far less prone to echoing the problems of real 1980s media.

Where Stranger Things reiterates the tween boy perspective favored by so many 1980s classics—and notoriously sidelines its nonwhite characters—Paper Girls features a diverse, female-led cast with a Chinese-American protagonist. It’s character-driven in the way of middle-grade literature, where fantastical adventures provide the backdrop for intense explorations of friendship and growing up. Each of the four main girls is compellingly well-drawn, with no attempt to sand down their rough edges. For instance, Mac is casually racist and antisemitic at first; an obvious result of being raised by neglectful, bigoted assholes in the 1980s. The show does a good job of articulating the difficulties of her upbringing, exploring the way she clashes with the other girls without demonizing her or letting her off the hook.

Co-created by Stephany Folsom (Amazon’s Lord of the Rings) and Christopher C. Rogers (Halt and Catch Fire), Paper Girls is notably well-paced for a streaming series. Episodes clock in at a very welcome 40 minutes, invariably ending in cliffhangers that range from nerve-wracking to absurdly fun. And the worldbuilding unfolds gradually, leaning into the fact that these kids have no idea what’s going on. (I’m trying to steer clear of spoilers, but Adina Porter is great as the ruthless, single-minded villain who pursues the girls as they travel through time.)

The main thing that makes Paper Girls feel more like an adult drama than a tween show is the way it uses its present-day setting. When the girls arrive in 2019, there’s an obvious temptation to confront their future selves, starting with Erin stumbling upon her middle-aged counterpart (Ali Wong). So while the girls are motivated by the priorities and impulses of any kid on the brink of adolescence, they’re also facing up to adulthood in a frighteningly literal way. Do they actually want to know what the future has in store? Will they have families and successful careers? Will they escape the things they hate about their childhoods?

Debuting with an eight-episode first season, Paper Girls does justice to its source material while finding a new way to tap into the 1980s revival trend, delivering a quirky, high-concept adventure with plenty of heart.