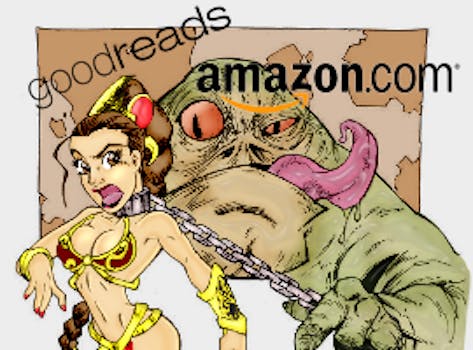 Goodreaders are worried about how the retail behemoth could change their community.

“What next? Libraries?” came the astounded response of @JustBooks at the news that Amazon has acquired Goodreads, the largest community of readers and book reviewers on the Internet.

“Nice,” commented @quitmyjob. “It’s like my favorite Intergalactic Princess has been chained to a slathering, gloating Hutt.”

The behemoth online retailer has contributed to the demise of independent and local booksellers. It’s been a thorn in the side of publishers and major competitors like Apple, which is locked in a tight legal battle with Amazon over industry-wide book prices.

Amazon’s ability to offer incredibly high royalties on its upload-it-and-sell-it publishing module that no other publishers can match is giving ulcers to e-publishers as well as the online imprints of traditional publishers. And even the retailers who do business with it most often come out the worse for the bargain.

“We are joining the Amazon family,” announced Goodreads founder Otis Chandler earlier this evening. “We truly could not think of a more perfect partner for Goodreads as we both share a love of books and an appreciation for the authors who write them.”

Chandler went on to cite the ease of integrating Goodreads with the Kindle as one of the biggest causes to rejoice in the news, as well as the opportunity to expand Goodreads’ overall reach.

But Forbes points out that the 16-million strong reader community stopped using Amazon’s API in 2011 because it was too restrictive, and wondered openly if perhaps the partnership would cause Goodreads to be unable to drive traffic to Amazon competitors like Barnes and Noble or IndieBound.

Apart from the monopolistic aspect of the deal, many Goodreaders wondered about integrity. One of the things the Goodreads community is known for is the enthusiasm and blunt honesty of its readers. “Given Amazon’s habit of deleting reviews freely on its site, I’m very worried for Goodreads,” commented book blogger Ceilidhann as the news broke.

Some are just scratching their heads over what this decision means in terms of Amazon’s overall business direction. After all, Amazon already bought—and promptly forgot—Goodreads competitor Shelfari in 2008. Forbes speculated that it was about competing with the newly launched Bookish, which was yet another industry attempt to combat the increasingly large reach of Amazon.

So far, many Goodreaders are welcoming the change as a much-needed step forward in Goodreads’ development. And Chandler stated in an interview Thursday that nothing would change for Goodreads culture or operations. “You can expect to see customizations and better integrations for people who do use Kindle,” he said, “For everyone else, Goodreads will remain largely as it is.”

But while the move may be the best thing for Goodreads, the publishing industry at large may feel much more like Goodreader Wendi:

“[S]ad for me, and sad for the Internet, which will soon be owned by Amazon… along with our souls.”