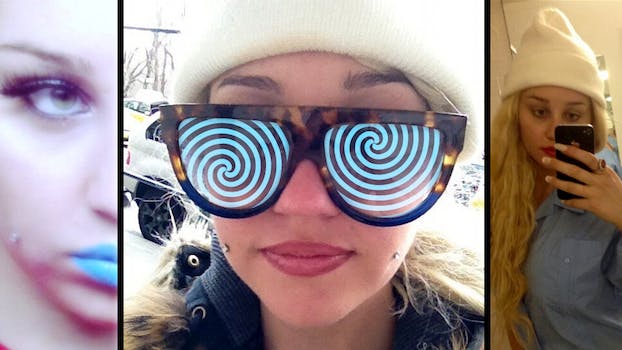 What the hell is going on with Amanda Bynes: A treatise

There are several theories about the former Nickelodeon star's erratic Twitter feed.

If you’re not following Amanda Bynes on Twitter right now, you are missing out on some truly macabre cabaret.

One year ago, in the wee hours of April 6, 2012 the former Nickelodeon star was driving her black BMW through West Hollywood when she attempted to pass a police cruiser. Instead of passing the car, she sideswiped it. An officer on the scene suspected Bynes had been drinking, and arrested her for driving under the influence.

Since then, Bynes has weathered a derecho of legal storms (including two charges of hit-and-runs, which she later settled out of court). She’s been dropped by her lawyer, publicist, and agent. She’s moved from Los Angeles (her hometown) to New York City. She’s inserted microdermal anchors into both her cheeks. She was possibly evicted from her condo, or maybe wasn’t. She might be living in the W Hotel in Times Square or, at any rate, smoking pants-less in its gym.

Sometimes the tweets that come from@AmandaBynes are funny in a crazy sort of way, like when she tweeted that she wanted rapper Drake to murder her vagina.

Sometimes they’re strange and sad, like when she announced on Thursday that she has an eating disorder.

Sometimes they give specific instructions regarding use of the bizarre selfies she posts to Twitter. (Though she tweets several pictures of herself every week, it’s hard to remember the last time we actually saw her face. In the images, her features are always half obscured by some combination giant sunglasses, her hand holding her phone, or the flash of the camera bouncing off a mirror.)

But what exactly is going on with Amanda Bynes? It’s not clear. Here are the theories:

Adopted by: Amanda Bynes
Monday, April 1:
This past Monday, paparazzi snapped several shots of Amanda Bynes walking around New York City carrying a FedEx envelope. She appeared disheveled in the pictures, wearing sweats, tons of rings, and socks with sandals. Her hair was dyed a dark, reddish pink with what looked like washable dye (possibly Otter Pops). On Tuesday, Bynes was photographed again in virtually the same outfit, though she had lost the socks and added a Rolex. Her purple Otter Pop hair had faded to a light, brownish pink.

That night, in a series of now-deleted Tweets, Bynes denied that it was her in the photographs (“I don’t own those clothes and I’m blonde! Haha!”) and suggested that there was an impostor-Bynes impersonating her (“My hair is blonde I’ve never been a redhead! Somebody keeps posing as me! Check my photos on twitter for up to date pictures!”).

If there is a purple-haired witch impersonating Bynes on the streets of New Amsterdam in the middle of the day for no clear reason, she’d very dedicated to her craft. They even have all the same jewelry (including cheek studs). But it’s probably just Bynes.

Adopted by: People who believe a celebrity checking in to rehab for “exhaustion” is really “exhausted”
Because the @AmandaBynes twitter handle is unverified and tweets a lot of insane things, some have wondered whether it is the actress’ real account. Bynes is currently without public representation (depriving us of even “a rep for Bynes had no comment”), which makes it even harder to contact her (unless you do it through her Twitter account, which may or may not be real).

As a rule, media outlets are treating the account as Bynes’ own. For one thing, she posts a ton of pictures herself that come from no other obvious source. And if she had, indeed, been hacked, it’s hard to believe she would have let the incident proceed so long without somehow addressing it. (If she’s ready to break her radio silence, she can always turn to her friends at [email protected].)

Adopted by: Most people
Rumors of Bynes’ alleged mental breakdown began swirling long before she started gaining attention for her erratic Twitter feed. Back in October, the Hollywood Reporter ran an in-depth article that suggested Bynes’ increasingly unpredictable behavior stemmed from her frustration over being typecast in teen-queen roles. The story pointed to Bynes’ abrupt resignation from production of the 2011 comedy Hall Pass (the actress maintains she left due to a scheduling conflict, however there were rumors she was fired for behaving unpredictably) as either “symptomatic of or the beginning of her precipitous decline.”

Initially, it was difficult to determine how much of the strong public reaction to her perceived “odd” behavior was justified. (During her infamous Cupcake Shop meltdown, a firefighter became concerned when Bynes locked herself in a public bathroom, while another witness commented that her demeanor seemed normal.) However, as more and more reports of strange interactions rolled in (Amanda Bynes replaced all the lightbulbs in her apartment with red bulbs; Amanda Bynes left a hair salon without paying), it became harder to deny that something was off.

The Rising from the Ashes Like a Joaquin Phoenix Theory

Adopted by: People whose perceptions of reality were forever altered by Joaquin Phoenix’s stint as “Joaquin Phoenix: Crazy Version”
This theory is grounded in the idea proposed in the Hollywood Reporter profile: that Bynes’ breakdown was prompted by her frustrations at getting passed over for darker, more mature roles. This reading is generous to Bynes because it gives her agency for her crazy. It also suggests that she should be wrapping up her whirlwind tour of madness any day now.

If Amanda Bynes’ strange new persona is an attempt to launch a smear campaign against herself, it’s been very successful, as evidenced by articles like the one you are reading wondering just what happened to her. Further, it does seem to have come out of nowhere; by all accounts, prior to her abrupt departure from the Hall Pass cast in 2010 (at which time she also announced, and then un-announced, her retirement from acting), Bynes was a dream to work with; grounded, normal, and very professional. If this is a calculated act, Bynes is a great actress.

(We should note that Phoenix famously appeared on The Late Show with David Letterman to introduce his “character” to the world; Bynes, who was described by Forbes in 2005 as the fifth-highest paid kids star, has given no formal interview for years. The closest she’s come was her infamous “25 Things You Didn’t Know About Me” feature for Us Weekly this past February, in which she basically admitted to having an eating disorder.)

Of course, even if we take Amanda Bynes’ tweets at face value, we can’t take them at face value. She’s an unreliable narrator.

On February 25, she tweeted that she had a new puppy named Jasmine, adding “I can’t wait to show pix!” Jasmine was never mentioned again.

There were never any pix.

By Caity Weaver | Photos via @AmandaBynes/Twitter // Art by Jim Cooke