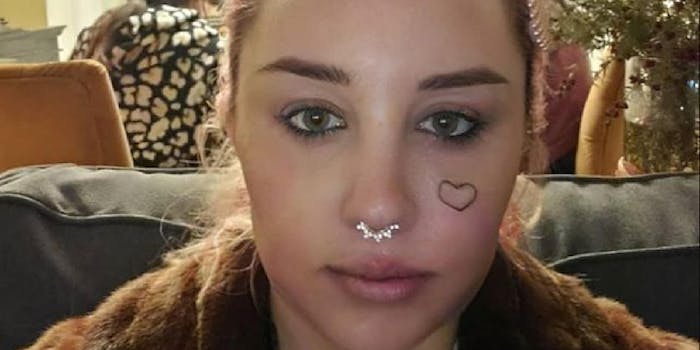 Does Amanda Bynes have a new face tattoo?

The simple photo posted to Instagram shows Bynes sporting what appears to be a fresh tattoo on her left cheek. It is unclear whether the small heart—about the size of a thumbnail—is the real deal, or if she accomplished the look through a filter or with non-permanent ink. Regardless, the new look has people talking.

The 33-year-old former Nickelodeon star has remained mostly out of the spotlight for several years now. She re-entered the public eye after a long break last year when she discussed her highly-publicized struggles with Paper. In the interview, Bynes noted that abusing drugs “really messed up” her brain and that now that she is sober, she feels like herself again. “Those days of experimenting are long over,” she said. “I’m not sad about it and I don’t miss it because I really feel ashamed of how those substances made me act.”

In the process of getting her life back on track, Bynes graduated from the Fashion Institute of Design and Merchandising in Los Angeles in June. Fans of the actress have high hopes that a comeback is on its way. The news of her new tattoo has fans split and sharing their opinions online. “If Amanda Bynes’ new face tattoo is real then I’d say things are going really well for her,” one fan wrote.

If Amanda Bynes’ new face tattoo is real then I’d say things are going really well for her pic.twitter.com/rwytERA0VE

Is Amanda Bynes okay? I ask because she got a messed up heart tattoo on her face and that’s usually the first cry for help

Leave it to Amanda Bynes to put the cherry on top of this decade by getting a face tattoo. She wins.

While everyone else is busy discussing the new tattoo, other fans are prepared for Bynes’ big 2020 comeback. “This decade simply must include a massive Amanda Bynes comeback,” one user wrote.

This decade simply must include a massive Amanda Bynes comeback

Bynes did not return the Daily Dot’s request for comment.