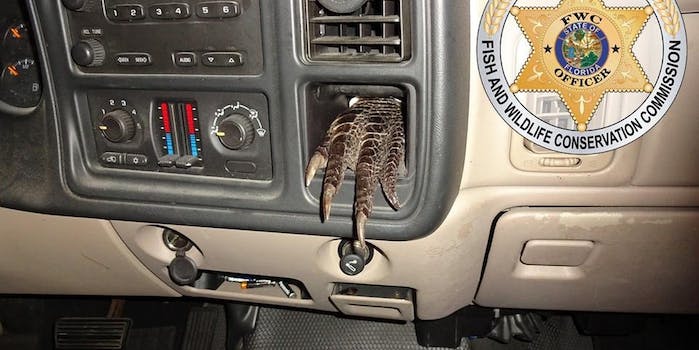 Two Florida Fish and Wildlife officers were in for quite the surprise when they found something other than an ice-cold orange soda sitting on a man’s dashboard.

Officers Luis Merizio and Casey Schroer stopped the truck to check the dude’s day-use pass at the J.W. Corbett Wildlife Management area. And like a tale straight out of a swamp witch’s lair, the two discovered alligator body parts spread throughout the vehicle, with a gator foot sticking out of the vehicle’s dashboard.

The commission posted a picture to Facebook on Monday morning.

The hunter told the officers that the parts were from an alligator that he hunted a few years prior, but Merizio and Schroer said the smell signaled otherwise. After the officers read the man his rights, he confessed to killing the animal just a few days ago and without a permit. He was given a citation for the violation.

Florida’s Fish and Wildlife Conservation Commission reminds people that if they want to hunt alligators, they should do it legally by getting the proper paperwork.

And generally, you just really shouldn’t put a severed gator claw on your dashboard.