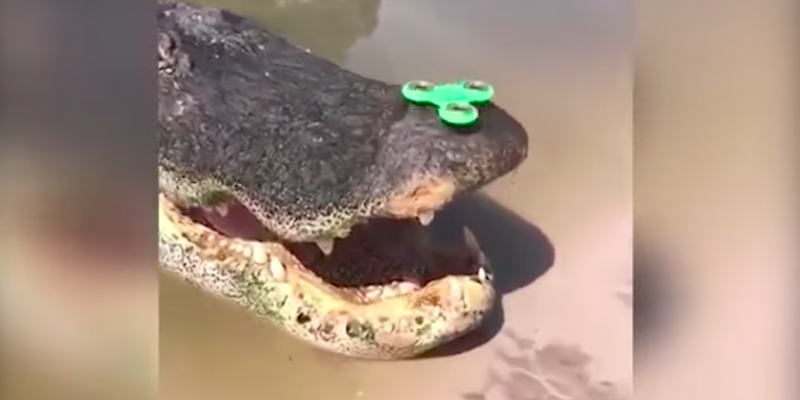 Running out of things to do with your fidget spinner? Why not place it on an alligators snout?

Boy, people are really running out of things to do with fidget spinners. Basically, we’re talking about some ball bearings and a disc, so this is not surprising. But boredom, as they say, is the devil’s playground. That’s why grown adults, who seem otherwise mentally sound, are doing things like putting fidget spinners on alligators’ heads.

The gigantic gator in the video is named “Bone Crusher.” He’s fourteen feet long and weighs around 1,000 pounds. So why not balance some kid’s toy on his nose? Nothing like the risk of losing your hand to make the afternoon fly by.

The sexagenarian reptile lives at “Wild Florida,” a wildlife park in Kenansville, Florida.

“We made the video to show the conditioning we have accomplished with one of our large alligators,” an employee said on Newsflare. “We used the fidget because they seem to be a popular thing right now.” They also shot video of a giant anaconda with a fidget spinner, although that seems a bit safer.

They aren’t they only ones looking to catch a bit of viral fame by combining the latest toy trend with one of the world’s oldest monsters. Here’s Barney the Gator passing the “spinner challenge”.

Fun tip for kids: If you want to film yourself doing something stupid and dangerous, consider putting the word “challenge” in front of it so that everyone knows it’s okay.

If you’re looking for something a bit more dramatic, you might enjoy Barney totally destroying this watermelon. It’s kind of a mean bait and switch though, so let’s hope he at least got that meat after he was done.