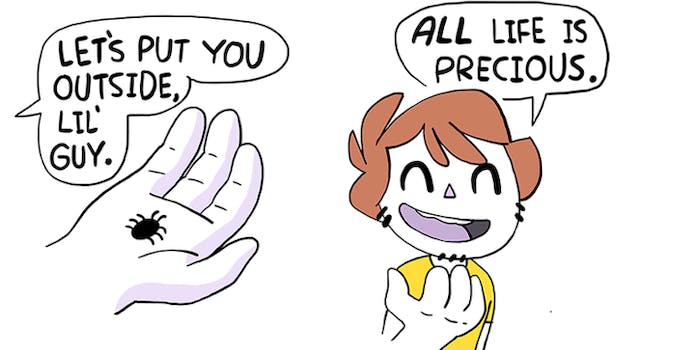 This harmless comic about spiders is now a dank new meme

All life is precious ... until it's not.

Webcomics continue to be a great source of inspiration for memes this month. First it was Tate Parker’s “Scroll of Truth” comic, and now a four-panel entry starring a spider (who is a huge asshole) has captivated the internet.

In the strip by Owl Turd Comix, a nice boy wants to put a spider outside instead of squishing it, because “all life is precious.” Then the spider says the unthinkable: “I post art without crediting the artist.” Squish. Sorry, spider!

The punchline is especially relevant because Owl Turd publishes comics on Tumblr, which is a great place to post new creative work … and see that work stolen and reposted without credit.

But, like the Scroll of Truth, this comic has a very exploitable third panel. Enterprising meme-makers have started filling in the spider’s speech with their own ideas of a declaration so bad it should be punishable by death.

A lot of the entries are meme-y jokes, like “catapults are better than trebuchets” (when everyone knows a trebuchet is the superior medieval war machine):

The same goes for a defense of 9gag, a site known for misappropriating memes from Reddit and 4chan rather than creating original content:

or the very overused “B” emoji:

The spider meme can also be used to discuss infamous real-life pet peeves, like pineapple on pizza (which is delicious, no matter what you say) and the font Comic Sans:

And, like as with many memes that get popular quickly, there’s already a fractal meta-meme that puts the comic inside the comic:

The locus of “all life is precious” memes appears to be Reddit’s r/dankmemes subreddit, which produces some very good memes, but has also been trending toward ironic (and not-so-ironic) Naziism in recent months. The spider meme is no exception, hence this awful version of the comic, with the panel order swapped to change the meaning:

Like the Scroll of Truth, this comic has become a blank slate that can be used to comment on anything the poster doesn’t like. It doesn’t carry any particular politics or ideology, it’s just what you make of it. And it’s certainly easy to make your own edits, which makes it ideal for topical jokes or mashups with other memes. Don’t expect it to have a huge lifespan, though: memes like this are quickly supplanted by the next funny image that serves a similar purpose.