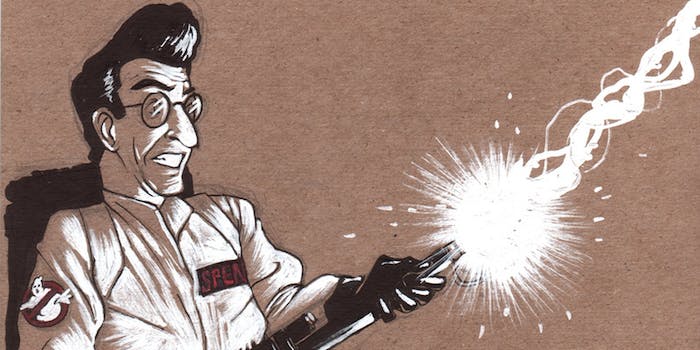 The reboot won't ruin your childhood—but it might help you see the world differently.

Hearts across the man-o-sphere shattered Thursday afternoon when it was announced that there was no all-dude reboot of Ghostbusters in the works. It was an especially tough blow because—just hours earlier—those fans were celebrating the news that screenwriter Drew Pearce had apparently just finished drafting a script for a new, righteously manly addition to the franchise (although it should be noted that Pearce later clarified on Twitter that his movie would be “inclusive,” with both a “mixed gender team” of ghostbusting humans and ghosts).

There has been a lot of excitement recently about what is happening with the Ghostbusters franchise. As the producer of the new Ghostbusters film, I feel the need to clarify. There is only one new Ghostbusters movie and that is the Paul Feig-directed version coming next July, presently filming and going fantastically. The rest is just noise.

On social media, people’s reactions have been hilariously out of touch with reality, ranging from faux-intellectual comments about how gender-swapping is “pandering” to women to complaints from Twitter users that the new film will “ruin” their childhoods. While a new Ghostbusters movie might seem like a silly thing to get so bent out of shape over, the backlash against the all-female version reveals some pretty brutal truths about the misogynistic underbelly of our collective unconscious—and shows why the all-female Ghostbusters is so necessary.

I will not be watching the new Ghostbusters in 2016. Nothing against the all female cast but why ruin a classic. There's no more talent

Part of the problem is, of course, straight-up misogyny (not to mention unfounded fears about Fake Geek Girls co-opting everything nerdy men love), but it’s also the fact that men are genuinely unaccustomed to seeing women in films. In a 2013 interview with NPR, Geena Davis discussed how the under-representation of women both onscreen and off leads men to have a skewed sense of what gender parity looks like.

My theory is that since all anybody has seen, when they are growing up, is this big imbalance—that the movies that they’ve watched are about, let’s say, 5 to 1, as far as female presence is concerned – that’s what starts to look normal. And let’s think about… in different segments of society, 17 percent of cardiac surgeons are women; 17 percent of tenured professors are women. It just goes on and on. And isn’t that strange that that’s also the percentage of women in crowd scenes in movies? What if we’re actually training people to see that ratio as normal so that when you’re an adult, you don’t notice?

There are other studies that reveal similar findings. One of them, which looked at gender parity in the workforce, showed that men “consistently perceive more gender parity” in workplaces than their female colleagues do. Another study showed that men are so used to dominating the discourse in a mixed-gender setting that a group needs to be 60 to 80 percent women before women start occupying just as much time in the conversation as men. In spite of all this, men continue to perceive that women take up more space in group discussions.

Australian feminist Dale Spender theorizes that this happens because men aren’t comparing how frequently women speak to how frequently men speak; they’re comparing how much women speak to how much they think women should speak. “The talkativeness of women has been gauged in comparison not with men but with silence,” she explains. “Women have not been judged on the grounds of whether they talk more than men, but of whether they talk more than silent women.”

Going back to that 33 percent figure that Davis cited, it’s interesting to note that it can be applied directly to the Ghostbusters franchise. Including the film that’s still in production, only a third of the representation in the films has been female: Bill Murray, Dan Aykroyd, Harold Ramis, and Ernie Hudson each acted in two entries in the series (that’s eight male entries), while Kate McKinnon, Melissa McCarthy, Leslie Jones, and Kristen Wiig fill out the new cast (four for women).

However, that ratio still feels like over-representation to some men—because in a way it is, based on their ingrained notions of how and how often a woman should be represented. Setting aside how ridiculous that notion might seem, we need to take a long, hard look at how our culture creates the perception that a group where only a third of the members are women appears to some people to contain “too many chicks.”

The media we are exposed to shapes how we view the world. Representation matters, and when we only see certain types of people reflected onscreen—namely, white, able-bodied, heterosexual men—then we start to feel like those people are the norm; anything else is lesser or even non-existent. That, in turn, creates an extremely biased view of the world, one that further influences the culture we create.

We need media that, thus, features a diverse cast of women—because the only way to correct our perceptions about gender parity is to make sure we’re exposed to films, books, and TV shows that represent the people we often pretend don’t exist.

The new Ghostbusters movie won’t ruin anyone’s fond memories of adolescence—in fact, they might make a lot of peoples’ childhoods a little better. For the young women who might not be used to seeing themselves on screen—or to being told that their stories matter—Wiig, McCarthy, and company aren’t just battling the supernatural. They’re fighting to give us a new generation of heroes.