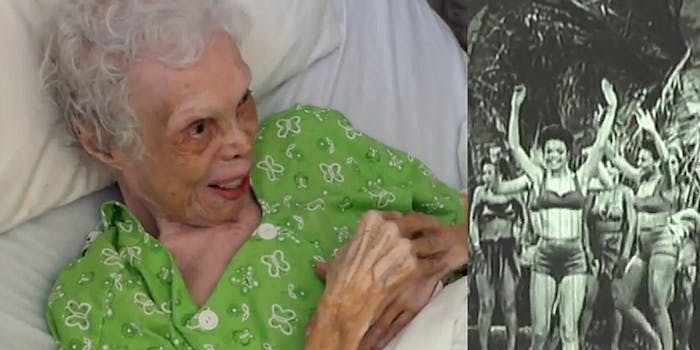 Alice Barker was a helluva chorus-line dancer in the 1930s and 1940s, and according to this YouTube description, she moved at clubs like The Apollo and Cotton Club while also working in films and TV. Somehow, though, Barker had never seen herself on film.

Until last year when the 102-year-old was presented with the ultimate flashback courtesy of David Shuff and Mark Cantor of jazz-on-film.com, who discovered a number of movies of Barker dancing.

A couple of things.

1. This goes without saying, but damn, Barker could really move, huh?

2. Barker had a simple explanation for why she was nicknamed Chicken Little. “Because,” she said, “every time we go somewhere, they’d say, ‘What do you want to eat?’ I’d say, ‘Chicken.'” Oh, OK. Makes sense.

3. While watching the footage a second time, Barker blurts out the biggest truth of the entire video: “It don’t mean a thing if it ain’t got that swing.”

4. When asked how watching herself made her feel, Barker said she wished she could get out of her bed and do it all over again.

Either way, Barker had it correct near the end of the video when she exclaimed, “It’s just fabulous. Fabulous to see these.”

H/T to Someecards | Screengrab via Tenfresh/YouTube