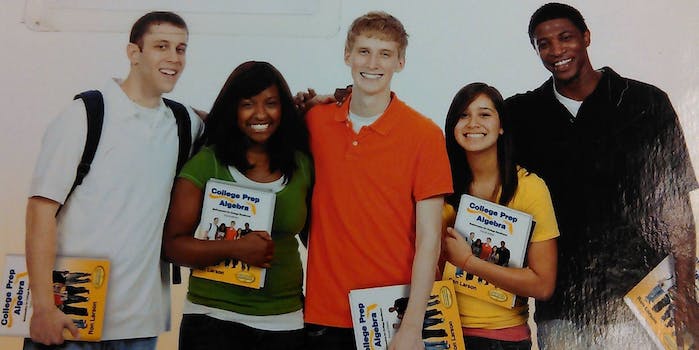 The cover of this algebra textbook is breaking people’s brains

It’s common knowledge that math is the devil’s work. Who else would create such an insidious discipline just to cause strife for those unfortunate souls that walk this Earth?

Now the devil is up to even more of his trickery, this time with the heavy tomes that students are forced to carry around, causing back problems on campuses everywhere: algebra textbooks.

how the fuck are they already on the textbook if theyre posing for it pic.twitter.com/fkpP9HTWnk

Twitter user @riarklerise tweeted the photo on Thursday, and as of Friday afternoon, it has over 36,000 retweets and 46,000 likes. People’s reactions have been pretty entertaining.

Now, before you grab the holy water, there’s a perfectly good explanation for this: Photoshop. Yes, the witchcraft of image editing is probably to blame for this illusion.

The photo actually was taken from a Reddit thread on r/MildlyEntertaining. There, a redditor found the original picture. And now it all makes sense. Nonetheless, the photo is a psychedelic delight.

Maybe the devil isn’t behind this trickery, but he should still apologize for inventing math.