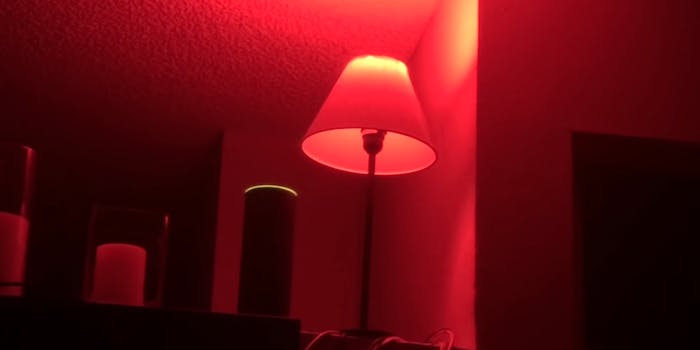 Alexa may not be able to actually scare off an intruder, but it can at least amuse your friends.

People are setting up their Alexa devices to respond to the phrase “intruder alert,” and while the results are unlikely to scare off an actual home invader, they might make them laugh the entire time they’re stealing your stuff.

The got its start on Reddit in the /me_irl sub-reddit. On Jan. 22, user EsG_Nitro posted a list of instructions for Alexa to execute when it heard the phrase “Alexa, intruder alter.” The device was supposed to turn on a red light; say, “Resistance is futile. Time to die”; and play the Imperial March from Star Wars at full volume.

From there, the meme got spread around Reddit with people posting both the original and various new versions.

You can make Alexa your home’s administrator from tf2

Ok now this is epic. from Hiphopcirclejerk

A user named Wolfey1618 even added a blank template so people who didn’t own an Alexa could get in on the fun.

And, of course, it wasn’t long before people started posting videos of themselves testing out the instructions.

They requested someone do it (Turn sound on)

From there, the meme spread to Twitter, where people posted both the original version of the instructions and their own variations.

One tweet showing the original instructions has nearly 60,000 retweets and over 200,000 likes, as of this posting.

they don’t stand a chance pic.twitter.com/mEUgf2Bzs9

Here is an excellent Shrek version, complete with green lighting.

Here’s one for Skyrim fans.

Here’s another example, which is only notable because instead of saying, “Resistance is futile,” Alexa seems to say, “Existence is futile,” giving the whole thing a more surreal, melancholy feel.

Please note, this doesn’t seem to work quite as well with Google Home. Something about it saying “OK, changing the lamp to red,” just ruins the mood.

This is a fairly new meme, but with a virtually endless number of commands that Alexa can carry out, there’s no reason to think we’ll see an end to these videos any time soon.