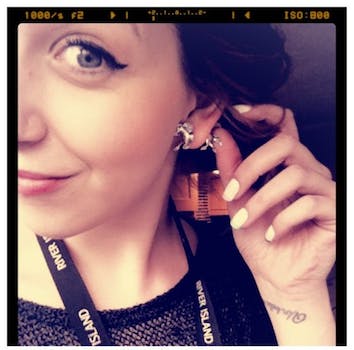 After McLeish, a Premier League soccer coach, was fired this week, an advertising student of the same name accidently caught an earful.

Having the same name as someone else can lead to a severe case of mistaken identity. Luckily for Alex McLeish, Twitter users were largely more of the jocular, rather than malicious, variety.

The advertising and PR student shares her name with a soccer coach. The more well-known McLeish was fired this week after narrowly avoiding relegation with Aston Villa in the Premier League.

As is the norm, people were quick to poke fun at the coach on Twitter. However, they mentioned the wrong Alex McLeish in their tweets.

“You’re gonna get sacked in the morning! Ginger shit,why you got a girls picture as your picture you sick freak,” John Davis wrote .

“You got sacked if you didn’t know already,” James Claytor added.

“You did deserve to be sacked, a hopeless manager #notgotaclue,” wrote the unintentionally ironic Michael Duffy.

The target of their tweets was quick to respond to their comments, though.

“I am Alex Mcleish the girl, not the football manager. Random guys stop tweeting me telling me I just got fired!” the part-time retail worker wrote.

As news of the case of mistaken identity spread, the younger McLeish’s follower numbers grew from 100 to almost 1,000.

She claimed not to be too bothered by some of the comments she was receiving, but she added, “[I] really wish I understood football so I could get more of the jokes.”

McLeish is slightly concerned, however, about some of the side effects that the incident might have on her:

“What if river island saw this as bad publicity & fired me ? How bad would you all feel?”

Once the game was up, the tweets mocking the coach using the @alxmclsh handle died down a  little. Yet some, such as Robert Thomas, thought that the student might actually have a future in soccer.

“She’d probably have a better chance of getting [Aston Villa] into Europe than the [McLeish the team] just sacked.”