In order to help save the Earth, Alex Bellini will give himself up to its awesome power.

While American astronaut Scott Kelly and a Russian counterpart have just begun a mission that will keep them in space for a full year, an Italian explorer named Alex Bellini wants to spend a year living on top of an iceberg.

Sounds crazy, right? Sure. But Bellini has a good reason for it. While Kelly is in space to see how the human body responds to 12 months without gravity, Bellini is trying to help save the Earth. Watch his trailer below to get an idea of how he’s planning to accomplish that.

But Bellini’s mission, which will begin this winter, isn’t quite as simple as hanging out in a big ball on top of an iceberg. It’s actually much more dangerous than that. Here’s how Outside explains it:

This is a precarious idea. Bellini will be completely isolated, and his adopted dwelling is liable to roll or fall apart at any moment, thrusting him into the icy sea or crushing him under hundreds of tons of ice.

His task: experience the uncontrollable nature of an iceberg at sea without getting himself killed. The solution: an indestructible survival capsule built by an aeronautics company that specializes in tsunami-proof escape pods.

“This adventure is about waiting for something to happen,” says Bellini. “But I knew since the beginning I needed to minimize the risk. An iceberg can flip over, and those events can be catastrophic.” Icebergs tend to get top-heavy as they melt from their submerged bottoms, so flips can be immediate and unpredictable. And, of course, so is the weather.

In order to survive all that, Bellini—who’s rowed across the Atlantic and Pacific Oceans and who walked across Alaska while pulling a sledge—needed a floating capsule that will keep him safe. That’s where a company called Survival Capsule, enters the picture. The company produces five types of capsules that can house from two to 10 people. Bellini chose the 10-person model with an outside diameter of 8 feet, but he’ll have nine of the seats removed and will custom-design the interior. As the company explains on its website:

“The Survival Capsule is a patent-pending, personal safety system (PSS) designed as a spherical ball to protect against tsunami events, tornadoes, hurricanes, earthquakes, and storm surges. Using a PSS, as opposed to a municipal safety system like a safe house, allows individual groups and families to be more in control of their survival in an emergency situation. The capsule is also a variable disaster solution, which means it can vary position according to the water depth, so it will never be inundated by water levels rising too high. It also provides warmth, safety, and shelter during the initial post-disaster period before rescue crews and relief workers have arrived on the scene.”

Bellini’s capsule could look something like this (except the interior likely will be completely different). 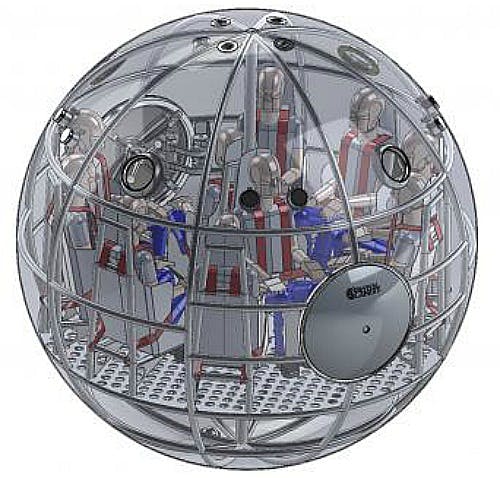 So, everything sounds totally cool for Bellini, right? Well, except for the idea that the iceberg on which he’s living will eventually melt.

As his website notes, “Clinging to that piece of drifting ice, Alex will spend up to twelve months to witness the last phase of its long life, while managing with a constantly changing environment. As the iceberg will get smaller and less stable Alex Bellini will have to adapt himself to the new situation. In order to survive for as long as possible, Alex Bellini will have to adapt his lifestyle and habits. This will be crucial to getting people to think, to make parallels with everyday life characterized by a total lack of willingness to change and adapt.”