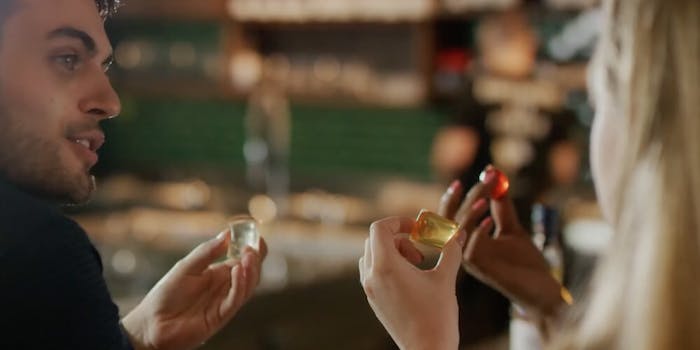 'An entire generation was told not to eat tide pods and you just set them all back.'

Tide Pods are back in the limelight after The Glenlivet, the world’s second best selling brand of Scotch, released “alcoholic Tide Pods” this week.

The Glenlivet released its “Capsule Collection” for London Cocktail Week as an innovative way to consume whiskey. The “glassless cocktails” come in three flavors–Citrus, Wood, and Spice. Each capsule contains 23 milliliters of whiskey wrapped in a Tide Pod-esque biodegradable wrapper made of seaweed. The capsules are meant to be bit into and the wrapping can be swallowed.

“We spend all this time convincing people not to eat tide pods and these motherfuckers just,” Twitter user @brownleej wrote, referring to the viral, dangerous Tide Pod challenge in which young people literally ate Tide Pods.

In the wake of the challenge, YouTube took videos down claiming they violated YouTube’s rules and encouraged “dangerous activities that have an inherent risk of physical harm.”

We spend all this time convincing people not to eat tide pods and these motherfuckers just… https://t.co/0i4Kd53lWy

*logs on to twitter and sees that tide pods are trending. Visible concern. Clicks.* Apparently, some genius made ALCOHOLIC TIDE PODS after we just convinced a whole army of people it's NOT OKAY to eat tide pods.

An entire generation were told not to eat tide pods and you just set them all back https://t.co/eWzGasaQcl

omg they made boozy tide pods just for when the first of Gen Z is about to turn 21 https://t.co/XrN0rbuUi3

“How can we connect with a younger audience and get them to enjoy Scotch?”

“Hey, you know how all those kids were eating Tide pods….” https://t.co/oN3ft4SMES

The Glenlivet partnered with co-founders of London bar Tayer + Elementary to create original cocktails, and Notpla, a sustainable packaging startup, to create the casings.

“We are always looking to break the conventions that have determined how single malt Scotch has historically been enjoyed,” Miriam Eceolaza, director of The Glenlivet, said in an announcement. “The Glenlivet Capsule Collection does exactly that, and we’re excited to see how people react when they try our glassless cocktails.”

Reports show that millennials and Gen Z are drinking less, and glassless cocktails are just one way companies are rebranding alcoholic beverages to younger consumers. Inhaling vaporized vodka is also trending in the U.K. as a way to get drunk quickly. Although vaporized vodka is gaining popularity with younger drinkers, there have been warnings about possible health consequences of inhaling alcohol.