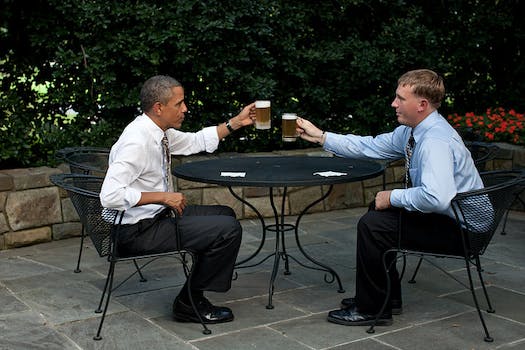 How I stopped hating and learned to love We the People

We the People is an interesting, and powerful, tool for the people and the government. It just doesn't do what you think it does.

It’s official, America will not be building a Death Star. For weeks the internet has been having a laugh at a petition on We the People which argues that the U.S. should “secure resources and funding, and begin construction of a Death Star by 2016.” By the time the petition ended, it had received 34,435 signatures, well above the number currently required to trigger an official response by the White House.

And that response was brilliant. Titled “This Isn’t the Petition Response You’re Looking For,” it lists three reasons why the U.S. military will not be getting a Death Star:

It’s hard to not chuckle about an official government communications riffing off of Star Wars memes, but it begs a larger question: Is We the People a serious tool or just one big joke?

We the People was launched on September 22, 2011 as part of the Obama Administration’s push toward transparency through technology. The premise is simple: anyone can create a petition on the site’s slick web platform. If a petition receives over 100,000 signatures (just raised from 25,000 last week) the White House is obligated to respond. Currently over 141,000 petitions have received slightly under ten million signatures; 162 have received an official response. On the surface it looks promising: like We the People is a useful tool for, well, the people. 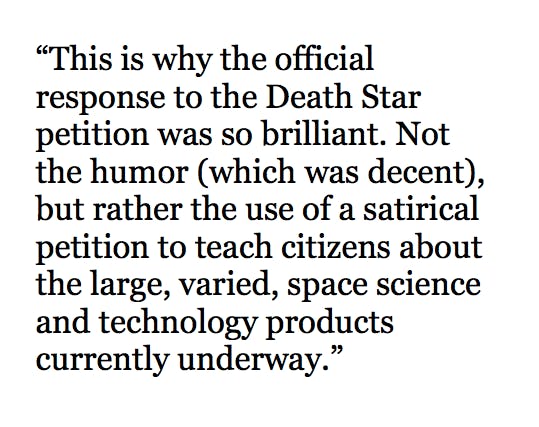 Things, however, look less rosey upon closer examination. The official goal of We the People is to provide “a new way to petition the Obama Administration to take action on a range of important issues facing our country.”

If this the bar, We the People fails miserably on a few counts. First off, after reading through almost all of the official responses posted on the website, I’d say there’s only one instance of a petition having a clear impact on Obama Administration policy: the petition to release the White House beer recipe, (which succeeded, much to the delight of amateur brewers everywhere).

And therein the second problem. While facilitating a response to “important issues” is ostensibly We the People’s goal, the White House offers up only vague claims concerning the platform’s actual ability for impact—e.g., to really change things. A blog post earlier this week said, “Many times, petitions posted on We the People have a real impact on policy-making.” Many times. Color me skeptical.

So far as I can tell, petitions, such those as for the secession of Louisiana and for not using monkeys in chemical warfare training, virtually never change policy (beer recipes excluded).

So is We the People a failure? No. 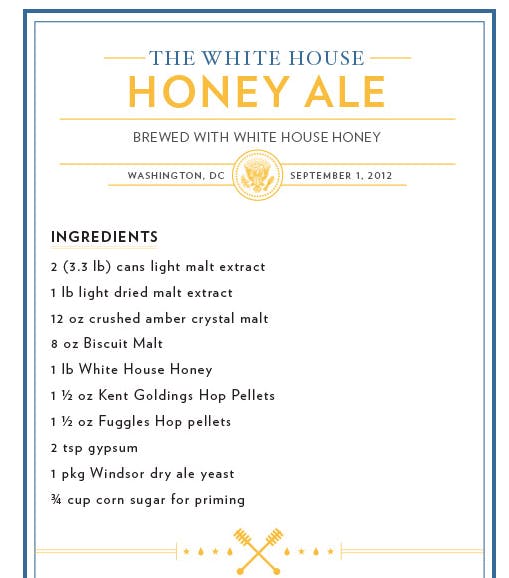 Want to know the government’s position on the humane treatment of horses? There is a response for that. Or what about F1 visa renewals? There is a response for that too. We the People provides something impressively unique: a direct method for citizens to actively compel their government to explain itself on issues of note. We the People isn’t Occupy Wallstreet, it’s the UK Prime Minister’s Question Time. And in a time of complex budgetary battles and semi-secret overseas wars, it is something we could all use.

This is why the official response to the Death Star petition was so brilliant. Not the humor (which was decent), but rather the use of a satirical petition to teach citizens about the large, varied, space science and technology products currently underway.

“Even though the United States doesn’t have anything that can do the Kessel Run in less than 12 parsecs, we’ve got two spacecraft leaving the Solar System and we’re building a probe that will fly to the exterior layers of the Sun. We are discovering hundreds of new planets in other star systems and building a much more powerful successor to the Hubble Space Telescope that will see back to the early days of the universe.”

In less than 500 words, the response to the Death Star petition directs readers to over ten science and technology projects funded by U.S. government—many of which would have gone unnoticed by ordinary citizens. The Death Star response, like all of the responses, is a “teaching moment”—an opportunity for the government to both explain its behavior to its citizens and highlight the work it does.

We the People will probably never become the mainstream tool for influencing government policy it purports itself to be. If it does, I will be its greatest cheerleader. But even if it doesn’t, there is real value in this tool: not as a prompt for the government to take action, but as a tool to compel the government explain its actions.

Petitioner signers might think they are demanding action from their government. They’re actually doing something very different: raising their digital hands to say, “Tell me what you are doing, and tell me why.” For a true democracy, there’s nothing more simple—or more important.