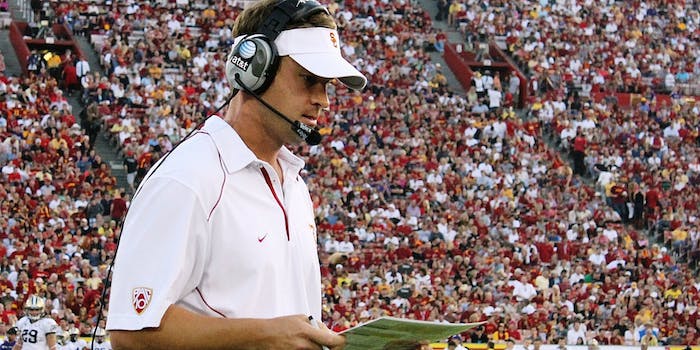 This takes Roll Tide Roll to an entirely different level.

When the University of Southern California athletic department fired head football coach Lane Kiffin, it didn’t give him the courtesy of a ride home from the airport at the conclusion of a team road trip.

Fast forward to 28 months later, as Kiffin, now the offensive coordinator at Alabama, helps lead the Crimson Tide to a 45-40 victory against Clemson in Monday’s national championship game. With Kiffin’s assistance, Alabama racked up 442 yards of total offense and 24 fourth-quarter points to outlast the Tigers.

But win or lose, it doesn’t matter. If there’s a bus that Kiffin needs to catch, that bus is probably going to leave without him.

“Is that that last bus?” Kiffin asks as it pulls away. Yes, Lane. That, unfortunately for you, was the very last bus.

According to these clips, one reason Kiffin was stranded without a ride was because he was conducting a walk-and-talk interview with Fox Sports’ Bruce Feldman.

As Feldman wrote in his game story:

In what surely will sound like The Most Lane Kiffin Thing Ever, Kiffin walked out of the University of Phoenix Stadium on Monday night only to see the team’s four buses pulling away. Kiffin was in mid-sentence, talking about his relationship with Alabama QB Jake Coker—”My bus is leaving,” Kiffin said.

They couldn’t leave without Kiffin, could they?

Kiffin whistled to a security guard about 50 yards away to stop that last bus. He hustled after it, but it was to no avail. Kiffin and his younger brother, Chris—Ole Miss’ defensive line coach—were now stranded at the stadium.

“First, I get fired on the tarmac, and now I get left behind at the national championship,” Kiffin said, half-jokingly.

But hey, at least Kiffin had a sense of humor about his ordeal. And with the way his offensive unit performed Monday, he probably didn’t have a difficult time flagging someone down for a ride.