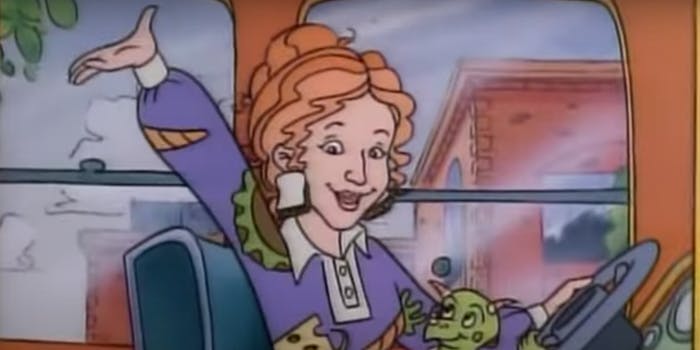 Man asks if he’s the a**hole for criticizing his girlfriend who dresses like Ms. Frizzle

A 43-year-old man showed a complete lack of self-awareness on the Am I the Asshole subreddit this week, assuming he’d done nothing wrong by lying to his preschool teacher girlfriend about other people finding her Ms. Frizzle-style wardrobe embarrassing.

Misleadingly titling his post “AITA for not liking how my girlfriend dresses for work?” OP went on to explain that his girlfriend usually wears matching dresses and masks to teach her class. She often makes the dresses herself she tends to coordinate them with whatever her students happen to be learning about that day, he said. He compared her outfits to Ms. Frizzle, the beloved teacher in The Magic School Bus book and TV series who takes her students on educational adventures.

The first problem comes from the fact that, despite the reason being blindingly obvious to anyone with half a brain, OP “just can’t explain” why his girlfriend dresses in fun, educational clothes to teach young children.

Even though her students and their parents love the way she dresses, OP dislikes the “amount of attention she gets” and wishes that she would come home and get changed straight after work if she’s planning on doing anything else that day.

This is something they’ve talked about before, and OP’s girlfriend has told him that while he doesn’t have to like her clothes, he has to accept that he can’t tell her what to wear. OP doesn’t accept this, however, and so when his girlfriend went out to run errands with his mother the other day, he was upset that she hadn’t changed out of her Ms. Frizzle dress first. Where OP went wrong is that rather than expressing this to her like an adult or keeping his irrelevant feelings on her clothes to himself, OP decided to lie to her instead.

I was upset she went out like that with my mother, and told her that my mom said she was embarrassed and to ask that she please not dress like that again if they’re going out.

Whatever outcome OP was expecting, it wasn’t his girlfriend ringing up his mother to apologize, but sadly for OP, that’s exactly what she did. Unlike OP, his mother apparently has no problems with the way his girlfriend dresses and didn’t feel inclined to lie to her on his behalf. Not only did his mother tell his girlfriend the truth, she then called him up to yell at him “for lying to my girlfriend and trying to throw her under the bus because I was being an insecure jerk.”

Instead of realizing at this point that he’d been a huge jerk and his only recourse was to apologize, OP doubled down. He went on to have a “huge fight” with his girlfriend in which he told her she should be embarrassed to be seen in public like that, and she told him that “the only thing she was embarrassed by was me.”

Despite his girlfriend refusing to speak or “do anything for me” since their fight, his mother’s disapproval, and his best friend calling him “trash,” OP still doesn’t really see that he did anything wrong. While he acknowledges that he shouldn’t have lied to her, he apparently thinks she “should take what I think about her clothes into consideration and I’m not sorry for expecting her dress more appropriately in public.”

Like all the best AITA stories, there is a happy ending. Citing his being “controlling and narrow-minded,” OP’s girlfriend broke up with him.