My classmates used my horrible yearbook photo to cyberbully me

I was humiliated by my yearbook photo. Too bad my classmates didn't care about that when they started using it as their AOL avatars.

I remember the gut-punch of embarrassment I felt when I saw it.

It was 2003 and I’d logged on to AOL Instant Messenger, like most Internet-savvy youths did at the time. What I quickly noticed was that my yearbook photo had been scanned, cropped, and posted as an ironic visual representation by my neighbor—ha, ha, ha, get it guys, it’s so bad it’s funny—for all of his buddies to see.

Eventually, posting the photo caught on and throughout the summer before high school, many of my classmates jokingly used my image as their AIM avatar, to my deep and abiding shame.

It was never someone’s icon for more than a few days, but the way that it cycled around and around made it hard to shake off. Someone would have it up. I’d be IMed about it.

I knew what it meant, but then I’d have to go and search my buddy list and see if, in fact, they were using it. They always were. Then a couple of days later, it’d be gone and onto the next person.

The damn longevity of the photo gnawed at me.

I was a 13-year-old girl with all of the feelings—so many feelings—that a hormonal 13-year-old has. On top of that, I was insecure and humiliated and without the faculties to deal with the situation with some sense of dignity.

Middle-schoolers are mean, and this was Internet bullying 2003-style. Sure, it wasn’t the first time I’d been bullied, but it was the first time that it wasn’t done to my face. People were behind computer screens, and it’s a lot easier to be cruel when you don’t have to watch someone cry. For what it’s worth, I think I have a Claire Danes-level ugly cry, so maybe they were more inclined to do it over the Internet.

I realize that kids nowadays certainly have it much worse than I did. Though, I’d like to believe that there’s a nugget or two of wisdom to be learned from my experience. 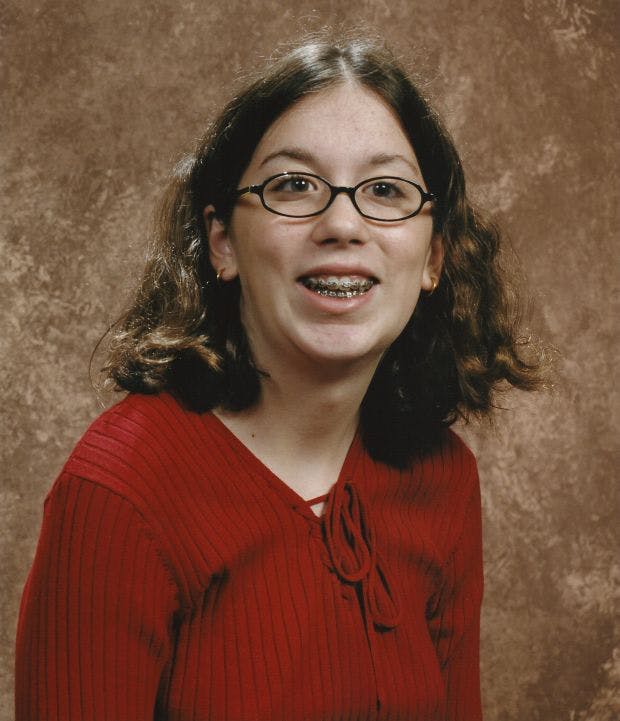 Part of what hurt so much is that I knew it was a bad photo, and I’d tried my damnedest to get re-takes. When our prints were distributed in homeroom that fall, I’d looked at the package, realized what it contained, and quickly moved it into my backpack, choosing not to participate in the usual sharing of yearbook photos.

The problem was that my parents, who rarely agreed with each other, both found the photo to be belly-clutching funny. (This was also the reason they paid for ballet lessons—go figure.) I’d begged them for re-takes but made the mistake of being truthful when they asked if they’d have to return the original photos. Maybe it wasn’t just their dark sense of humor but the inkling that puberty sucks no matter what and I’d needed to grow a thicker skin. Maybe that’s giving them too much credit. But they declined my request and I was stuck with what I’d deemed to be the ugliest possible representation of myself.

I think one of the reasons my photo was circulated so easily was that I wasn’t vocal about how bad it made me feel. Instead of IMing my neighbor, who wasn’t such a bad dude, and explaining how I felt and asking him to stop using it, I’d been passive. I didn’t yet have the confidence to tell someone how I felt about anything, and I didn’t understand the implications of the situation. For middle schoolers and teenagers, you’re hyper-aware of your physical presence because everything that matters tends to be superficial. How you represent yourself is all on the outside. Each clique has a look; it’s unfortunately how you’re judged.

That was the year I’d gotten glasses, choosing a thick black frame, not because I’d taken the time to discern what flattered my face but because I’d been told over and over that my personality reminded my classmates of Daria Morgendorffer; unfortunately, my Jane Lane had been transferred to Catholic school, so I was left to my own devices. My hair, which was cut into an unflattering yield-sign shape, had started to kink and curl and I had no idea how to tame it. I was still over a year away from getting my braces removed.

Suffice to say, no matter what, I looked like a nerd and was treated as such.

It’s certainly easy to look back and lament all of the ways in which I could’ve handled the situation better. And yes, it was a small prank, but it had a lasting impact on my confidence and the way that I view myself to this day.

I’ve since learned that your appearance doesn’t define you or who you will be. But I’ll admit, it’s also nice to know that even on my worst day as an adult human woman, I won’t look as bad as I did in my eighth-grade picture.

This piece originally appeared on xoJane and was reprinted with permission.