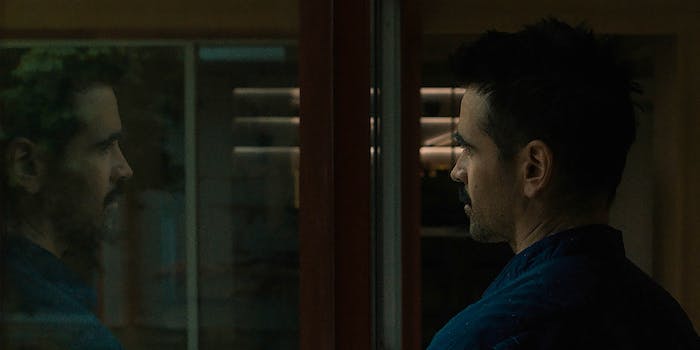 ‘After Yang’ is a contemplative exploration of loss and memory

There are no easy answers in After Yang, writer-director-editor Kogonada’s (Columbus) quiet contemplation of memory, loss, and what exactly it is that makes us human. It’s set in an undetermined future that looks very close to our own apart from a few tweaks, including the incorporation of androids known as “technosapiens” and clones into society and vehicles that look more like miniature domes. The conflict at the center of After Yang doesn’t involve grand or nefarious conspiracy (although one minor character seems to think so). The narrative device in which some of After Yang plays out is deceptively simple, yet a dazzling wonder to watch unfold in unassuming fashion. Even the opening credits—a colorful sequence that makes me grateful that streamers haven’t tried to implement skipping title sequences for movies yet—offer a small bit of worldbuilding on a character level.

RELEASE DATE: March 4, 2022
DIRECTOR: Kogonada
STREAMING: Showtime
After the family android suddenly stops working one day, a father tries to get him repaired—and in the process he uncovers a treasure trove of memories. Beautifully shot and with a grounded performance from Colin Farrell, it’s a quiet but powerful rumination on memory, grief, and what makes us human.

Those existential quandaries—ones touched on in “Saying Goodbye to Yang,” Alexander Weinstein’s short story on which After Yang is based and others that Kogonada’s script expanded upon—largely play out in an internal fashion that, thanks to a nuanced performance from Colin Farrell, will stay with you long after the credits roll.

Jake (Farrell) owns a tea shop that’s still stuck in the 21st century, one that struggles to obtain customers because he refuses to sell more modern iterations of tea. Kyra (Jodie Turner-Smith) is successful but her job often keeps her away from home. They’ve adopted their daughter Mika (Malea Emma Tjandrawidjaja) from China, and Jake and Kyra purchased Yang (Justin H. Min), a cultural technosapien designed for Chinese adoptees to help Mika connect to her Chinese heritage. From the outside, they’re a picturesque family, and at first, you get the impression that the view isn’t too different from the inside, either; photos of the quartet fill their home. Although Yang’s designed to educate, he often ends up acting as Mika’s primary caretaker, and Mika treats him like her older brother; they call each other Gege (big brother) and Meimei (little sister).

One day, with almost no warning, Yang starts to malfunction; he’ll continue executing moves long after he’s supposed to stop. The next day, he won’t turn on at all. Yang is still under warranty, but Jake purchased him certified refurbished from a shop that no longer exists (in its place is a shop that sells pet fish), so he’s not even sure what he needs to do or where he should go to get Yang repaired. The primary supplier of technosapiens tells him to recycle Yang, which will give him a discount on his next purchase. A repairman looking at Yang, based on the recommendation of his neighbor George (Clifton Collins Jr.) thinks something’s amiss, although going down that rabbit hole might be illegal.

In a way, it almost feels like a Sisyphian effort. If Yang can’t be repaired, Kyra doesn’t want to get another technosapien. “We’ve been over-reliant on him,” she tells Jake. And Mika just wants her brother back. But Jake keeps seeking some kind of answers to what happened to Yang, going from place to place. A museum curator (Sarita Choudhury) wants to study Yang and put him on display, but she gives Jake the tools to access Yang’s memory storage, allowing him to see just what memories Yang saved.

The visualization of that memory bank (which Jake views through a pair of specialized sunglasses) is simplistic, with Benjamin Loeb’s lush cinematography making After Yang’s colors pop. Clusters of memories look like tree lights branching from one to the next, and Jake can rewind, repeat, zoom in, and examine memory from every angle. It’s a slow ascension, and Farrell’s calm and gentle presence helps steady that journey from becoming too repetitive.

Sure, Jake is trying to determine if there’s something hidden in Yang’s past that might give insight on how to repair him, but it’s just as much an exploration of how Yang views the world around him: What he questions about himself, the people and clones he met and connected with, how he views the world. It’s a beautiful and complicated thing, and maybe, as Jake attempts to explain his love of tea to Yang—something that Yang knows plenty of facts about but can’t comprehend in other ways—there isn’t the language for it. The questions and answers might not be written in stone, but the journey might offer more.

After Yang had its North American premiere at the 2022 Sundance Film Festival and will debut in theaters on March 4, 2022.

Update Feb. 1, 8am CT: This article has been updated to reflect the announced release date and trailer.