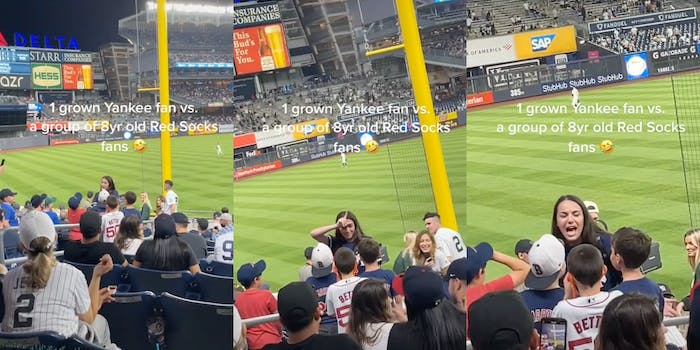 'It was just a joke then she got kicked out of the section.'

A two-part TikTok series recorded at a baseball game shows the bitter rivalry between Yankees and Red Sox fans. Except in this case, the Yankee fan is a grown woman, and the Red Sox fans are a group of children.

The TikToks, posted by @jsilve23, show the woman yelling at the children, using confrontational body language, and flashing the “loser” sign at them. The videos have a collective 86,000 views on the platform and one has over 3,600 upvotes on Reddit.

Someone in the background, presumably the person recording, repeatedly yells, “You were alive for three of them.” It’s unclear what that comment was in reference to.

The woman can be heard saying, “Why are you here?” to the children. That question appears to goes unanswered, but it’s seems clear from the footage that the kids are there to show love to their favorite team.

One user commented, “Looks like they were all joking around.” The creator replied, “It was just a joke then she got kicked out of the section.”

On Reddit, u/Wolfgang_von_Goetse reposted the TikTok with the caption, “The bitter rivalry between the Red Sox and the Yankees boiled over the other day when a New York woman made the mistake of arguing with a gang of 10 year olds from Boston.”

According to u/Rupert–Pupkin, this behavior is completely normal.

They commented, “My dad used to take me to the old yankee stadium for Yankees/Red Sox games and it would be insane in the bleachers. Beer pouring, constant slurs and cursing, fighting, totally nuts. This is just fooling around.”

All for the fun of it, right?

@jsilve23 did not immediately respond to the Daily Dot’s request for comment.