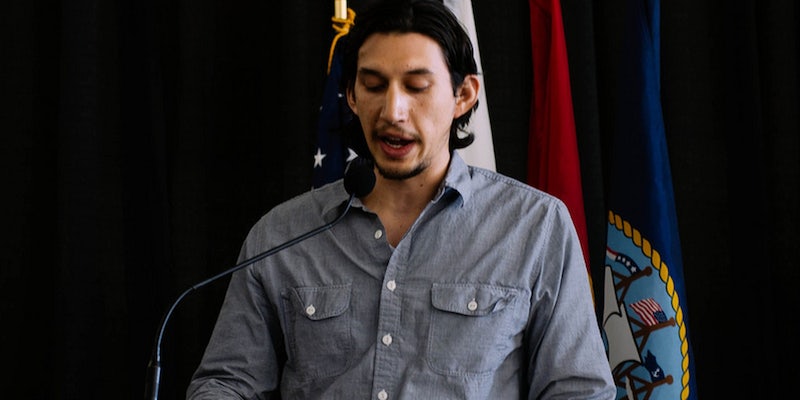 Why Adam Driver is the first breakout movie star from ‘Girls’

Adam Driver, who plays the slightly unhinged boyfriend to Lena Dunham’s atypical ingénue on the HBO series Girls is about to take on a much darker role: a yet-unnamed villain in the J.J. Abrams reboot of Star Wars. After months of Internet casting rumors, the latest report on Star Wars: Episode VII casting from Metro UK speculates that the 30-year-old actor might be joining the dark side of the Force alongside Gary Oldman and Benedict Cumberbatch, who have also been approached for roles in the new film. Principal photography is expected to begin at London’s Pinewood Studios in May.

The truth is that the Walter Whites, the Don Drapers, and the Frank Underwoods are almost universally lionized in pop culture, whether it be in spite of or directly in relation to their often “unlikeable” actions and character traits. And let’s face it: Female antiheroes—the Skyler Whites, the Betty Drapers, the Hannah Horvaths—just make everybody feel uncomfortable. To put it bluntly, women are much easier to boo than applaud.

Of course, this is not to say that Driver doesn’t deserve his movie star catapult. He honed his craft at Julliard (in the class ahead of Looking’s breakout star, Frankie J. Alvarez), scored bit parts in Oscar-nominated films like Lincoln and Inside Llewyn Davis, and packs an impressive punch of weird humor, fear, and pathos into his character of Adam Sackler on Girls, especially in this superb third season. By all accounts, he’s earned it.

But then there’s the matter of “earning” the right to be famous, and to be respected for one’s work—a right that has been called into question for all four of Girls’ female leads over the course of the series’ run. Would Lena Dunham, Allison Williams, Jemima Kirke, and Zosia Mamet (daughters of artist Laurie Simmons, news anchor Brian Williams, rock drummer Simon Kirke, and playwright David Mamet, respectively) have succeeded at all without the help of their famous parents?

Sure, having ties to the entertainment industry probably helped them get through the casting director’s door; and, in the case of Dunham, from the screens of South by Southwest for her debut film, Tiny Furniture, to Judd Apatow’s office for a television pilot. But do we constantly question the sons of Hollywood heavyweights—Michael Douglas, Jared Harris, Kiefer Sutherland, Jeff Bridges, to name a few—for getting a leg up? Of course not.

If Dunham, Williams, Kirke, and Mamet possessed not a single drop of acting talent between them, a) they would not have been cast, b) the series would not have made it past the pilot episode, and c) Girls would not be the pop cultural phenomenon that it is today. You can cry nepotism, you can call Dunham fat and ugly all you want, but you cannot deny that these actors are believable in their roles.

I’ll even take it one step further. These women are not just incessantly watchable in their portrayals of Hannah, Marnie, Jessa, and Shoshanna; They are excellent. Periodically, as evidenced in the climactic scene from the beach house episode, their interactions are downright brilliant.

The most recent episode of Girls featured Driver in his usual supporting role, but the main focus was on a family of women: Hannah and her mother (the wonderful Becky Ann Becker, whom you might remember as Mrs. Weir on Freaks and Geeks), aunts (Amy Morton and Deidre Lovejoy), and cousin (Sarah Steele), gathering at a hospital to work through their issues and say goodbye to their ailing matriarch (June Squibb, recently Oscar-nominated for Nebraska).

Masterfully written, acted, and directed, the episode reminded me once again of 26-year-old Dunham’s extraordinary talent and vision as a showrunner. I also realized how frustrating it must be for Dunham to helm a personal experience-based series as a young woman, especially when her voice is constantly being dismissed and invalidated by unoriginal, often blantantly sexist critiques (usually from men) of when, why, and how her character decides to take her clothes off.

Driver’s character went shirtless for almost all of Girls’ first season. Unsurprisingly, no one complained.

Photo via VietnamWarVeterans/Flickr (CC BY 2.0)