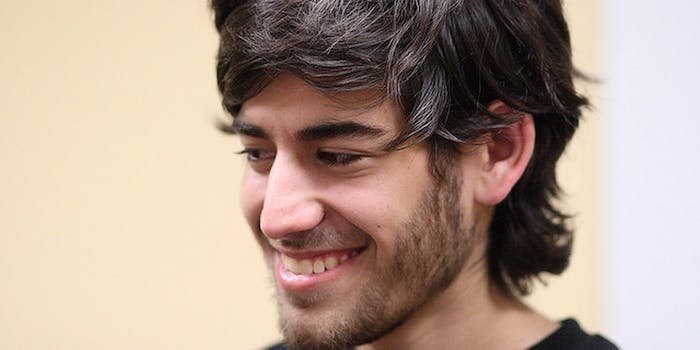 Just 26, the open Web pioneer was facing felony hacking charges from the Department of Justice.

Aaron Swartz, Web activist and programmer, took his own life in New York City on Friday, a family member has confirmed to MIT’s The Tech.

A pioneer of the open Internet, Swartz, 26, was facing 13 counts of felony hacking stemming from allegations that he scraped more than 4 million MIT papers from JSTOR, a journal archive for academic papers, with the intent to make the work publicly available. He pled not guilty.

Swartz was a technological wunderkind whose impact on the Web and a generation of like-minded hackers cannot be overstated. At age 14, he coauthored the now-ubiquitous RSS 1.0 specification and later cofounded Creative Commons, the nonprofit responsible for copyright licenses that make creative works legally available for others to share and work upon.

In 2005, his startup, Infogami, merged with social news site Reddit, though a year later, after a cross country move to San Francisco, he was asked to resign. More recently, he helped launch Demand Progress, a left-leaning campaign organization that assisted in the massive Web protests against the Stop Online Piracy Act and Protect IP Act last January.

Many in the technology community have harshly criticized the Department of Justice’s case against Swartz, noting that the so-called victim of Swartz’s actions, JSTOR, requested the DOJ drop charges against him. In fact, just weeks before his suicide, JSTOR announced it was releasing more than 4.5 million articles to the public.

Swartz suffered from depression, which he chronicled frankly on his blog, including this post from 2007:

“Surely there have been times when you’ve been sad. Perhaps a loved one has abandoned you or a plan has gone horribly awry. Your face falls. Perhaps you cry. You feel worthless. You wonder whether it’s worth going on. Everything you think about seems bleak—the things you’ve done, the things you hope to do, the people around you. You want to lie in bed and keep the lights off. Depressed mood is like that, only it doesn’t come for any reason and it doesn’t go for any either.”

Another post, penned shortly after he left Reddit, troubled site cofounder Alexis Ohanian so much that he picked up the phone and called the police, who later showed up at Swartz’s apartment. Swartz denied that the post was a suicide note.

Web communities, from Twitter to Reddit to Hacker News to Metafilter and Slashdot, descended into a kind of mass morning only possible on the Internet on Saturday morning, as hundreds of thousands of friends and colleagues and long-time admirers and complete strangers mourned together in the open digital spaces where Swartz spent much of his life. Twitter users have mentioned Swartz more than 52,000 times since news of his death broke early Saturday morning, according to Web analytics tool Topsy.

And on the front page of influential technology news aggregator site Hacker News, nearly every post was some form of memorial to Swartz. 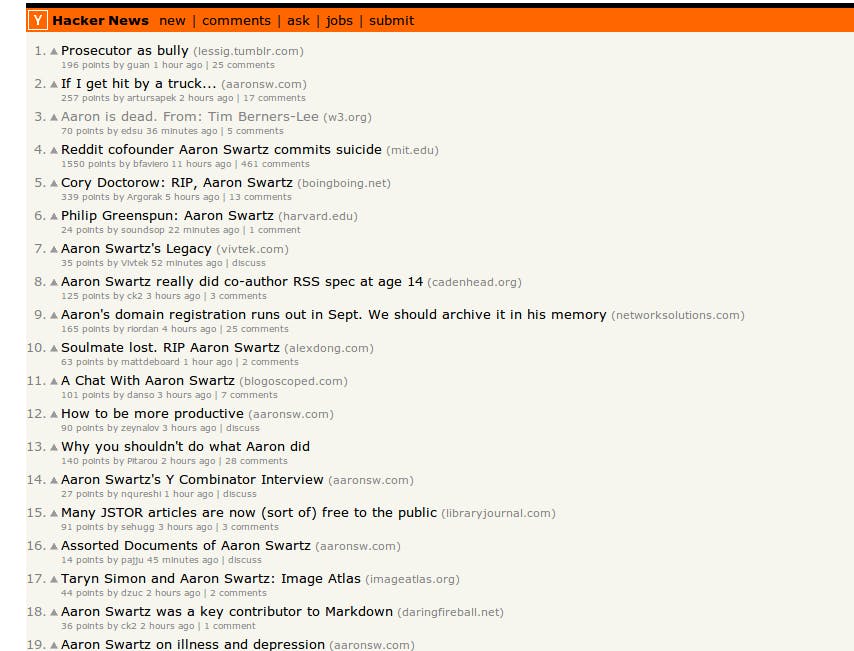 In the comments section, Swartz’s mother apparently showed up to thank the community for its support:

“Thank you all for your kind words and thoughts. Aaron has been depressed about his case/upcoming trial, but we had no idea what he was going through was this painful. Aaron was a terrific young man. He contributed a lot to the world in his short life and I regret the loss of all the things he had yet to accomplish. As you can imagine, we all miss him dearly. The grief is unfathomable.”

Early this morning, BoingBoing’s Cory Doctorow posted a moving obituary of his longtime friend. Remembering him as “a full-time, uncompromising, reckless and delightful shit-disturber,” Doctorow’s post has been shared nearly 14,000 times across Facebook and Twitter.

I don’t know for sure whether Aaron understood that any of us, any of his friends, would have taken a call from him at any hour of the day or night. I don’t know if he understood that wherever he was, there were people who cared about him, who admired him, who would get on a plane or a bus or on a video-call and talk to him.

John Gruber, who, along with Swartz, created the markup tool Markdown, described Swartz as “a great person.”

“I’m dumbfounded and heartbroken. Good thoughts and best wishes to his family and those who were truly close to him.”

While many, including Doctorow, have avoided drawing hard connections between the legal case against Swartz and his suicide, others have not held held back. Swartz’s Creative Commons cofounder, Larry Lessig, has launched a scathing critique of the DOJ on his blog.

“Some will say this is not the time,” he wrote. “I disagree. This is the time when every mixed emotion needs to find voice.”

“… the question this government needs to answer is why it was so necessary that Aaron Swartz be labeled a “felon.” For in the 18 months of negotiations, that was what he was not willing to accept, and so that was the reason he was facing a million dollar trial in April—his wealth bled dry, yet unable to appeal openly to us for the financial help he needed to fund his defense, at least without risking the ire of a district court judge. And so as wrong and misguided and fucking sad as this is, I get how the prospect of this fight, defenseless, made it make sense to this brilliant but troubled boy to end it.”

Matt Haughey, founder of MetaFilter, also saw something sinister in the effects the DOJ case may have had on Swartz:

Aaron had a national news story and the government specifically targeting his escapades and I can’t imagine what that pressure was like. I’ve had dark clouds hanging over me before but knowing that federal attorneys were gunning for me and eventually there was seeming like a shitty day in court coming I don’t know how I could function normally and on some level I totally understand why he would take the exit path he did.

Aaron, I’m so sorry to see you go. You were an amazing person who did incredible work that helps us all out and I really wish you stayed for many more decades so you could continue making society a better place to be. I’ll really miss you.

And on the mailing list for the World Wide Web Consortium, Tim Berners-Lee, who invented the Internet as we know it, posted a eulogy in the plainest of plain text:

Wanderers in this crazy world,
we have lost a mentor, a wise elder.

Hackers for right, we are one down,
we have lost one of our own.

Nurtures, careers, listeners, feeders,
parents all,
we have lost a child.

Let us all weep.

Our beloved brother, son, friend, and partner Aaron Swartz hanged himself on Friday in his Brooklyn apartment. We are in shock, and have not yet come to terms with his passing.

Aaron’s insatiable curiosity, creativity, and brilliance; his reflexive empathy and capacity for selfless, boundless love; his refusal to accept injustice as inevitable—these gifts made the world, and our lives, far brighter. We’re grateful for our time with him, to those who loved him and stood with him, and to all of those who continue his work for a better world.

Aaron’s commitment to social justice was profound, and defined his life. He was instrumental to the defeat of an Internet censorship bill; he fought for a more democratic, open, and accountable political system; and he helped to create, build, and preserve a dizzying range of scholarly projects that extended the scope and accessibility of human knowledge. He used his prodigious skills as a programmer and technologist not to enrich himself but to make the Internet and the world a fairer, better place. His deeply humane writing touched minds and hearts across generations and continents. He earned the friendship of thousands and the respect and support of millions more.

Aaron’s death is not simply a personal tragedy. It is the product of a criminal justice system rife with intimidation and prosecutorial overreach. Decisions made by officials in the Massachusetts U.S. Attorney’s office and at MIT contributed to his death. The US Attorney’s office pursued an exceptionally harsh array of charges, carrying potentially over 30 years in prison, to punish an alleged crime that had no victims. Meanwhile, unlike JSTOR, MIT refused to stand up for Aaron and its own community’s most cherished principles.

Today, we grieve for the extraordinary and irreplaceable man that we have lost.

Donations and remembrances can be submitted at the memorial site, http://rememberaaronsw.com.

Correction: This story originally stated the merger between Infogami and Reddit occurred in 2006. The correct date is 2005.