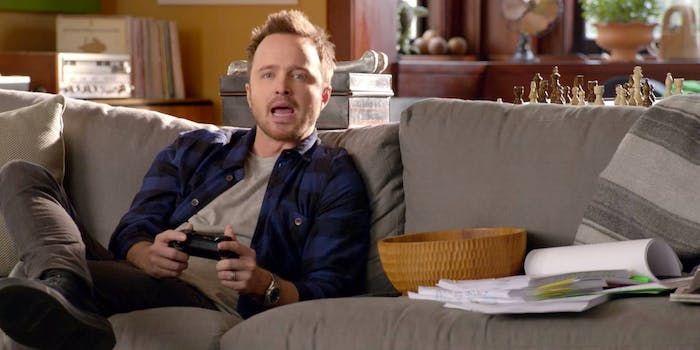 Aaron Paul is accidentally turning on Xbox consoles around the world

Frustrated gamers are tired of Aaron Paul turning on their Xbox.

Owners of Xbox One consoles have taken to social media to complain that Aaron Paul, the actor best known for his role as Jesse Pinkman in Breaking Bad, is turning on their games console without their permission.

Aaron Paul stars in a new commercial promoting the Xbox One, which includes him saying the phrase “Xbox On.” Here’s the problem: Xbox One consoles include Microsoft‘s Kinect sensor, which works by constantly listening for voice commands. Paul’s line from the commercial is triggering game consoles all over the world.

Xbox One fans are taking to Twitter and Reddit to complain that Paul is causing havoc with their consoles. Effects of the voice commands spoken in the advert range from turning on consoles and launching games to turning off televisions.

That #XboxOne commercial with @aaronpaul_8, aka Jesse Pinkman, just turned on my damn Xbox when he said “xbox on”

@Xbox your new TV advert is annoying the hell outta me. Aaron Paul keeps turning my console on… #stooooop