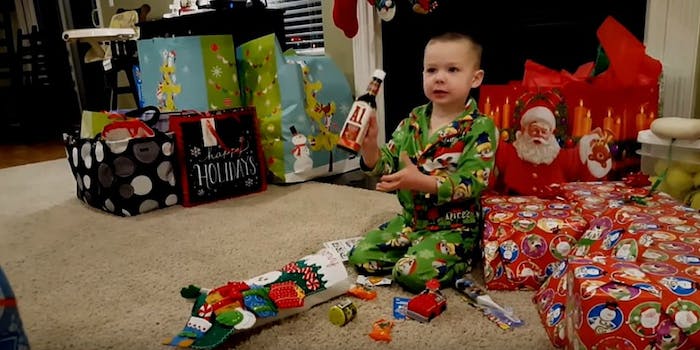 Bottle of A.1. sauce just might be the best Christmas present this kid ever receives

All he wants for Christmas is a delicious steakhouse condiment.

As long as you don’t order A.1. in a fancy steakhouse, insulting everyone from the chef who cooked the meat to the cow who gave its life to feed you, the nearly 200-year-old condiment should be enjoyed as often as possible.

A.1. is a delicious concoction made of tomato puree, vinegar, corn syrup, and potassium sorbate, and it makes your steaks—and your life—just a little more delicious. But don’t take my word for it. Let’s watch as the kid below receives a bottle of A.1. for Christmas and see just how goddamn pleased he is with the world after realizing the gift he’s received.

Notice that he doesn’t scream or shout about his present, one for which he’s presumably hungered for since he can remember. He doesn’t act surprised. Instead, he wants to make sure the verbal contract is sealed as soon as possible (he will NOT share, because IT IS HIS).

It’s as if the A.1. is something he expected, as if it were his birthright to give his tastebuds the most pleasurable ride possible. He’s happy but not overwhelmed. In short, he responds like a man who knows exactly what he wants and receives exactly what he expects to get.

Of course, perhaps we should look at the context and theorize if this kid is just a happy boy all around. After all, the previous gift he opened was a toothbrush. And he seemed pretty pleased about that as well.