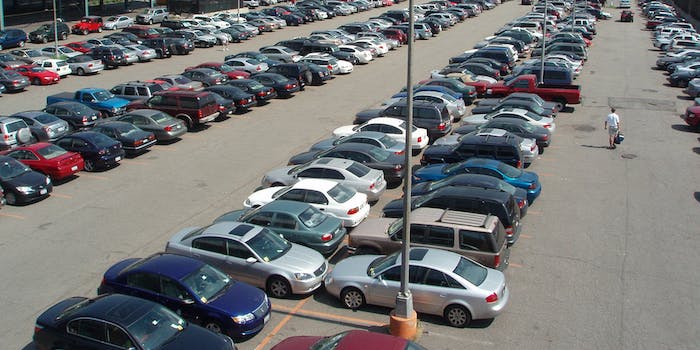 92-year-old Russell Carr hit nine cars in under 60 seconds, but luckily, no one was hurt.

Usually when you hear about a car wreck involving ten vehicles, you fear the worst. But luckily for 92-year-old Russell Kerr, the only thing that was injured in this accident was his pride.

It all began innocently enough, as the elderly man from Mayville, Wisc. was trying to back his van out of a Piggly Wiggly parking lot last Friday. Though Kerr was cautious while exiting the parking space, his foot got caught on the accelerator, causing him to lose control and go careening forward. From there, he panicked, hitting a total of nine cars in under 60 seconds while trying to leave the parking lot.

Though two of those nine cars were occupied, no one was injured and no charges are being pressed against Kerr. Thankfully, most of the drivers involved in Kerr’s parking lot panic were able to make light of the accident. Donald Gourlie, who was inside the store buying a Valentine’s Day card for his wife, told WISN News “I wrote, ‘I love you’ on the bottom” of the card, followed by, “‘P.S. Sorry about your car.'”

While Gourlie waits to see if his insurance will foot the bill for the $2,400 worth of damage to his vehicle, Kerr is waiting to see if he needs to be retested for his license. Police have sent the accident report to the Department of Motor Vehicles, who will determine what next steps should be taken.