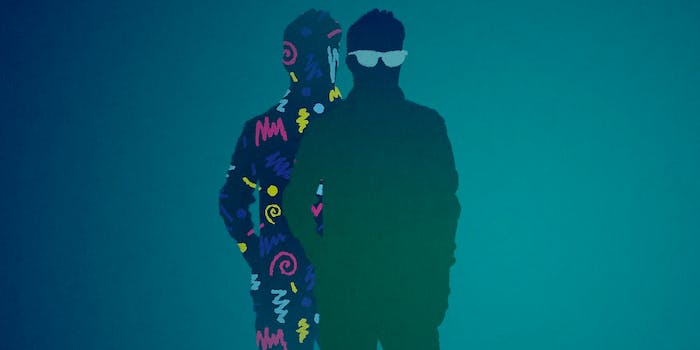 Your favorite ’90s TV catchphrases were all about shade

Don't expect to get a tan in all this shade.

The ’90s, at this point, really seem to be no more than grist for the nostalgia-deranged content mill that is the Internet. Yet we’ve been sadly remiss in bringing our distinctly 21st-century social concepts and Twitterized slang to bear on this not-so-long-lost decade. Sure, we could have simply relived the era’s favorite TV sitcom catchphrases, but we pushed ourselves to do something more. Something meaningful.

Here, then, are the best ’90s TV catchphrases, ranked by shadiness:

Mirror, mirror, on the wall—who’s the shade queen of them all? Michelle Tanner, of course.

1987. As a baby, she worked her way into our hearts with perfectly timed burps and Uncle Jesse hair-pulling.

Michelle Tanner became a phenomenon of her own. Her most famous catchphrase—“You

got it, dude”—was the punchline of nearly every scene she was in. It’s easy to overlook this

saying as a simple acknowledgement, but this truly was slights of all slights. “You got it,   dude” is the most passive-aggressive way to tell someone to get the hell out of your face

because you’re done listening to what they have to say.

It’s Monday, you’re at work, and you’re not being as productive as usual—because you’re a

lazy piece of shit. Your boss is “motivating” you with some light threats, and

you can either cuss her out or hit them with the “You got it, dude,” and a thumbs up.

Cussing her out would be totally satisfying, but the job market is cruel to people who

don’t take shit. Thus, you respond to every comment with “You got it, dude,” and the

widest smile your face can possibly transmit. Your boss will think you’re newly committed to

working hard, when in reality, you’ve simply deluded her into thinking you actually care what

she thinks. When Michelle says “You got it, dude,” she’s really saying: “I’m five years

old, I hear you but I’m not going to do shit.” Adopt that attitude toward life and

remember that you’re too young and fabulous to care about the haters.

We remember Family Matters like it was yesterday. A well-meaning Steve Urkel, in his

corny highwaters, suspenders, and oversized glasses, would slip and destroy the fruits of

the Winslow family’s hard labor. He was nosy, intrusive, and a low-key stalker of Laura

Winsow. Urkel’s only redeeming quality was that he had a heart of gold… Or did he?

treated him with contempt? Perhaps the real question isn’t “Did I do that?” but “Did you

check out how I fucked ya game up right there, don’t make me do it twice?”

You’re standing in a high-traffic area at the bar. People keep bumping into you. At first

you take it in stride because you’re a good person and want to go to heaven, but even

Mother Teresa had her breaking point. An acquaintance bumps into you and shrugs it off.

You respond by pouring your $13 dollar drink all over their white pants. Whoops (#worthit). When they begin to fume and yell at you, hit them with the most nasally “Did I

do that?” that’s ever been recited. Of course you did that, but you can’t be punished for

shade by absolving you of any guilt, chalking up your intentional assaults to

Kel is singlehandedly responsible for orange soda’s spike in market value. On Kenan & Kel, he was the strange best friend who never went home, didn’t have parents, and kept to a diet that would’ve landed most children in protective services. His love for orange soda

was unparalleled, and he was unashamed to admit that no human could contend with this

Doesn’t seem like shade at all, right? Wrong. (Have you even been

allegiance, no ties—he only looks out for self and soft drink.

When you’re in a relationship, your significant other will sometimes get on your nerves.

Sometimes he/she isn’t even doing anything; their mere existence pisses you off. Rather

than starting a fight, it’s best to just subtly shade them so they know their tier in the

relationship hierarchy. When your significant other tells you they love you after a long

day of being the most annoying fucking person in the world, tell them, “Kel loves orange soda.” They’ll undoubtedly laugh and nudge you to say you love them, too. They need that validation—as humans, we’re all sad and hollow. Don’t give them shit. Instead say, “I do, I

do, I do-oooo,” and then stare into the blacks of their eyes until the thin veneer of trust shatters.

They’ll never bug you again, and you’ll wield all the power.

He doesn’t say much, and he doesn’t do much. All he wants to feel is the warm

embrace of his hoodie, but the South Park boys are always dragging him into their

or shot, which prompts Stan or Kyle to say, “Oh my god, they killed Kenny. You

Although this seems kind, remember that the South Park boys are saying this

because Kenny is already dead. Really, his blood is on their hands. This catchphrase is

from constant threats. In all likelihood, Kyle, Stan, and Cartman are glad that they

weren’t the ones gruesomely impaled. If feigning shock and outrage is the only effort needed to

mourn Kenny’s death, then that is exactly what they’re going to do to look like

Everyone has that friend who is always getting caught up in drama. Whether they’e being

stopped by the police, escorted outside by the bouncer, or yelled at by the fire

marshal, this person is always busted for your mistakes. Some people are just

unlucky, and it’s your civil duty to capitalize on any friend’s unluckiness to make sure your

ass stays out of jail. Next time your friend takes the fall for your wrongdoings, run

KENNY, THOSE BASTARDS.” Your friends can rest assured that they’re properly

mourning a comrade’s capture and “the Kenny” will think you’re saluting him for his martyrdom. That’s exactly what you want him to think.