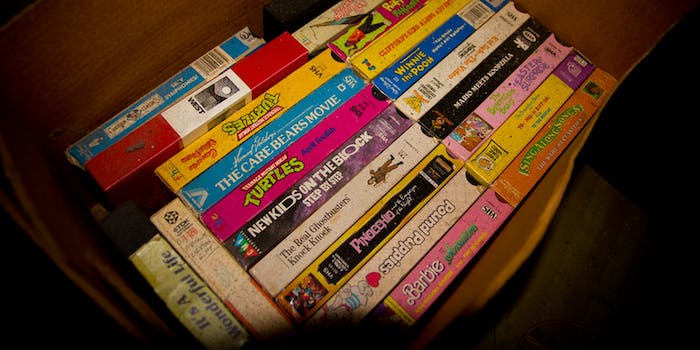 By being okay with regurgitated culture, we lower the bar for new culture.

In one week, two staples of ’90s children television have announced their triumphant return. Via Kickstarter and Netflix respectively, Reading Rainbow and The Magic School Bus have found their way back into production.

While we begin to see the full-on effects of Millennial nostalgia for that halcyon decade of the 1990s, it’s been hard to ignore the fond remembrances of educational television from that era.

As I’ve written before, this level of nostalgia is not unique to the twenty-somethings of today and is only amplified by the Internet’s ability to retain and utilize any media, no matter how old (see this 80s TV simulator, commercials and all).

However, what we’re seeing now are the targets of that nostalgia driving their creative minds out of the ash heap of fame, aiming to preach once more not just to the Millennials they raised from the glow of a TV set but to the children Millennials are raising themselves.

As Don Draper can tell you, nostalgia makes money. However, as the final wave of 90s children begins to enter adulthood, it’s gradually becoming less appropriate (and also somewhat cringe-worthy) to sit and watch children’s shows all day. For those who already have children, however, what better way to enforce the cultural hegemony of “The 90s Were Awesome” than by indoctrinating the impressionable next generation with Mega-Man and Dungarees?

And the profit incentive to do so is capturing corporations and aging celebrities alike. Levar Burton, the seminal host of Reading Rainbow for most of it’s 24-year run, has somehow made himself more famous than he was back when he could make Run-DMC rap about reading. With several guest spots on cult TV show Community (as well as a cameo on The Big Bang Theory) and a few minor controversies on Twitter, he evidently has wormed his calming tones back into our hearts with a Kickstarter to reboot his show, earning over $1 million in less than 12 hours.

Netflix, for its part, has seen the tea leaves and has spent tens of millions of dollars for ’90s children programming. Along with this week’s announced revival of The Magic School Bus, Netflix also hosts the entire original runs of Pokemon, Courage the Cowardly Dog, Sonic the Hedgehog, Thomas the Tank Engine, The Powerpuff Girls, and scores more of the intellectual property that so warmed your childhood.

Nostalgia as a cultural force is nothing new, and mass media only enhances its effect. Happy Days and Grease filled the 70’s with the 50’s. The 1980s saw the resurgence of such classics of the 1960s as The Pink Panther, Spider-Man, and Scooby Doo. The 1990s made bell-bottoms and lava lamps back in vogue, and the aughts saw the blockbuster remakes of those same comic book heroes the ’80s stole from the ’60s.

These are obviously cherry-picked examples (I just as easily could cite ’50s-style Swing revivals or the debut of Nick-at-Nite in the 1990s), but they show nostalgia as a potent force used by the media to sell clothing, movies, toys, and pop culture as a whole.

The opportunities provided by the Internet–wherein you can relive almost any cultural remembrance you hold dear–means that nostalgia can be packaged and shipped with more ease than ever before. Not only does it expedite the process, however, it stales the culture at large.

The problem with being not just comfortable but overjoyed about the return of previous cultural phenomenon—be it Reading Rainbow or Transformers—is we are quite literally paying the entertainment world to be a stale, dull landscape of overused ideas and reliance upon franchises. We are now at a point where a movie simply having an original storyline—not including one taken from a novel or an historical event—is a credit for the filmmakers all its own. By being okay with regurgitated culture, we lower the bar for new culture.

While there is certainly no shortage of original children’s entertainment—from Dora-esque shows like Doc McStuffins to the megahit film Frozen—attempting to recreate the magic of Ms. Frizzle and her anthropomorphic school bus for a new generation cheapens the content and the children you’re so carefully marketing it towards.

Our children should grow up demanding more of their filmmakers, writers, and animators. They should not be okay with five major Spider-Man releases in a single decade. The best way to do that is introduce them to good original content, allow them to build connections with art and entertainment that they can call their own. How much more of the ’90s do we need to spew upon them, if only to ignore the fact that our own youth is ending?