Kid writes hilarious apology after pinching brother in the nuts

Rule No. 1 of being a good brother: If you're going to pinch your younger sibling in the nuts, you better come back with an earnest and awesome apology.

Rule No. 1 of being a good brother: If you’re going to pinch your younger sibling in the nuts, you better come back with an earnest and awesome apology.

That’s the way things played out for 9-year-old Zac the other day. The Adelaide, Australia, kid was discovered to have pinched his brother in the testicles during a skirmish one afternoon by his parents. Fortunately, those same parents instilled within Zac the virtue of guilt. He apologized shortly thereafter with this exceptional note. 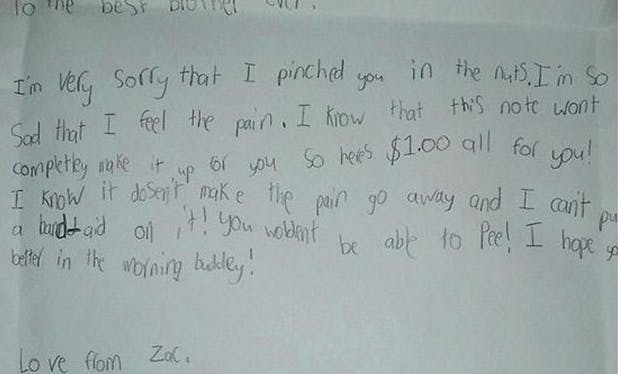 To the best brother ever,

I’m very sorry that I pinched you in the nuts. I’m so sad that I feel the pain. I know that this note won’t completley make it up for you so heres $1.00 all for you! I know it doesn’t make the pain go away, and I can’t put a band-aid on it! You woldent be able to pee! I hope you’re better in the morning buddey!

You wouldn’t be able to pee! Somebody better tell Zac that you do not piss out your nuts.

Zac’s mom put the note on Facebook, where a million moms liked it and another million dads laughed at the thought of a Band-Aid on their scrotum.