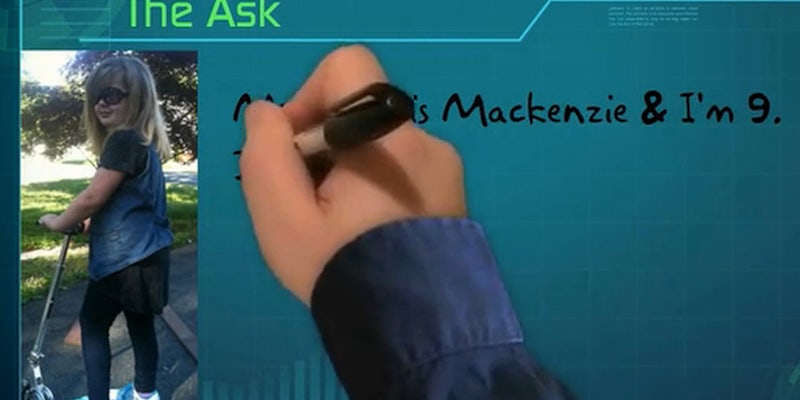 The third grader hopes to build an RPG that's free of inappropriate language and violence.

In the same week that people lost their minds over the Donglegate and upon learning that a woman is behind the popular Facebook page “I F*cking Love Science,” the Internet redeemed itself somewhat after throwing its collective support behind a Kickstarter campaign that’ll help a 9-year-old girl build her very own role-playing game.

With the help of her mother Susan, Mackenzie Wilson—she goes by Kenzie— turned to the popular crowdfunding site to raise $829, enough money to cover her entrance fee to RPG STEM Camp, a program where kids learn the necessary skills to build their own video games.

According to her video, the third grader hopes to build an RPG that’s free of inappropriate language and violence and that “allows team members to face danger together and get hurt but doesn’t kill teammates off and eliminates them from battle.”

Kenzie notes in her project page that she wants to get a headstart in technology thanks in large part to her entrepreneur mom.

“My parents are into technology as users but my Mom has to hire programmers and developers sometimes for her work,” she notes. “She’s really glad I like computers and programming because she says as a business person she feels like she’s held hostage by developers.

“She’s the one that got me interested in creating my own stuff on my computer instead of just playing with stuff other people create.”

Also serving as motivation were her two older brothers, teenage haters who don’t think she’s capable of raising the money, much less actually make a game.

They’re wrong at least in one accord. In the two days since the campaign was launched, 844 backers have pledged $15,499. That’s more than enough to send Kenzie to camp all summer long and to purchase a new laptop. On top of that, Adobe has agreed to give the 9-year-old a complimentary subscription to Adobe Creative Cloud to help Kenzie in her noble pursuit.

It’s not just Kenzie’s older brothers drinking the haterade. Some Kickstarter commenters are cautioning other backers that this might be a scam.

“I think many of you are missing some very suspicious things regarding this Kickstarter,” writes backer Corey Brinn. “First the Kickstarter rules themselves say that you can’t Kickstart for tuition, a camera, etc and all these things are basically what the Kickstarter is for.

“Also check out the mothers linkedin. She’s a Harvard grad amongst many other things that needs to raise money to send her child to camp? The video also has a 9 year old girl saying she will basically have to rely on ‘sugar daddy’s’ multiple times if she is unable to go to camp? These are all very suspicious things in my opinion. I’ve reported the Kickstarter so they can look into it further. It smells like a scam that is using ‘the cute factor’ to real people in….'”

The backlash has been loud enough that Susan Wilson responded in an update, noting that she will be posting a video showing off her entire family.

Negativity aside, it’s refreshing to see the Internet put its pettiness away long enough to make a little girl’s dream a reality.

H/T The Next Web | Photo via Susan Wilson/Kickstarter