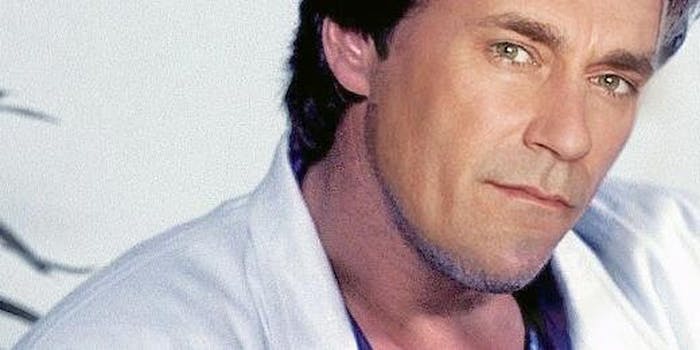 Don Draper tries to sell you the ’80s

'80s Don Draper pushes the iconic '60s ad exec two decades into the future. He'd be pushing 60 at that point, but no less surly.

A lot of things were acceptable in the ’80s that might not be now.

It was someone’s job to sell you all that tosh. It might very well have been down to Mad Men‘s Don Draper.

A spoof Twitter account for Draper, ‘80s Don Draper, pushes the iconic ’60s ad exec two decades into the future. He’d be pushing 60 at that point, though as the account’s creator, Onion contributor John McNamee, shows, he’d be no less surly.

Draper’s snarky remarks on the Care Bears, faxes, and parachute pants are even more gold than Spandau Ballet’s classic of the same name. However, that avatar and cover photo are simply glorious. Ever stylish, there’s little doubt Draper would hop on board the fashions of the ’80s and out–Don Johnson Don Johnson. 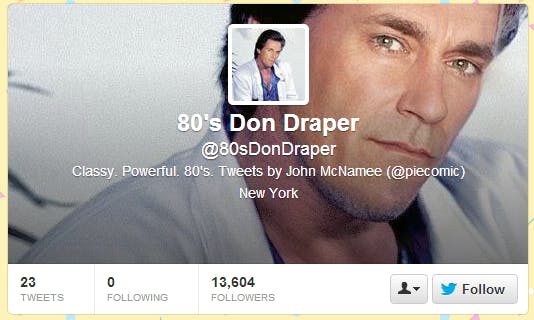 Now here are what we call some of ’80s Don Draper’s greatest hits. He could dance if he wanted to, but he’s too cool for that.

Come back to me when you know why I should care about these bears.

The sooner you realize this is a post-Paula Abdul world, the sooner we can sell some Casios.

I don’t need some mood ring telling me my copy’s good.

They’re not A Team. They’re THE Team.

Who’s the Boss? The customer.

Either buy this doll, or it will die in a cabbage patch. That’s the threat we’re selling.

We need a jingle for the Luftbaloons spot. Ideas?

The world’s moving so fast, sometimes you need parachute pants to slow it down.

The hippos eat marble after marble, but are never satisfied. That’s America.

People want a dance that makes them feel safe. They’ll do anything for it, even leave their friends behind.

Meanwhile, there are at least two Twitter accounts devoted to the penis of Don Draper and his real-world alter ego, Jon Hamm. That member came under the media spotlight recently when it emerged AMC asked Hamm to start draping his dong and wear underwear on set.

AMC probably wouldn’t have a problem if Mad Men were set in the ’80s and Draper were wearing parachute pants.