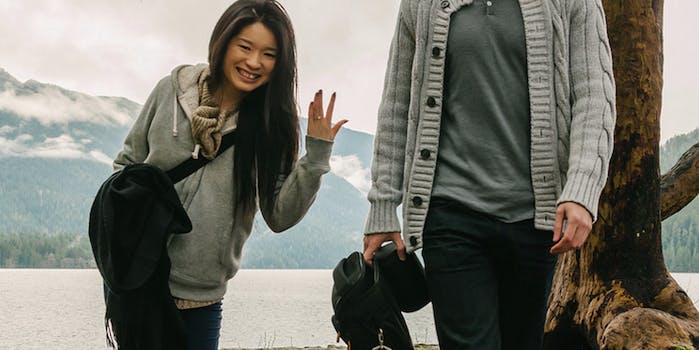 8 simple steps to make him propose this engagement season

Do we hear wedding bells?

If you’re a normal, healthy girl, what you really want for the holidays is your face (and, ideally, ring finger) featured on Instagram’s @howheasked proposal page.

3) Show him you’re the perfect roommate!

When a guy is ready to settle down, it means he’s ready to share his life. Make sure he knows that life with you will be better than bachelorhood. He should feel like he’s moving back in with his mom (except for all the blow jobs, lol). Whether he didn’t get that big promotion or needs someone to wash his undies, be his rock and you’re sure to get one of your own!

Don’t be threatened when he wants to leave you home alone. Respect his guy time and use it to do your own thing! Be yourself and do something that’s just for you! Something girly, like luring an older married man back to your place and stabbing him in taint when you’re going down on him. That’ll teach him to cheat! Or it would if the blood loss wasn’t sure to kill him!

When your boyfriend gets back from his guy’s night, he’s gonna be drunk. Seeing that dead body on your living room floor is gonna freak him out. But don’t worry! This is the perfect chance to show him he wears the pants (even though you look great in those J Brand jeans, lol). Your man may seem like he can carry the weight of the world on his strong, broad shoulders, but deep down he’s a vulnerable child, easy to manipulate. Remember, it’s behind every great man is a great woman. Not in front of. So tell him he’s the one who killed the creep. With his feeble male brain, he won’t be hard to convince.

I would like to gladly announce that she said yes!!! pic.twitter.com/tt8SJpRm5D

6) Be enthusiastic about his hobbies!

I’m not saying you can’t watch Bravo while he’s at work and you’re folding laundry, but try to take an active interest in the stuff he likes. Take him into account when stealing your getaway car. Something sporty to get you out of town faster, or a heavy duty pickup for easy transportation of the body/grave-digging supplies? A wife doesn’t need to ask. She just knows!

Here’s what men will never tell you: They want a girl in the bedroom and a bro everywhere else. Rock hiking boots as well as you rock those sexy stilettos! Learn to fish and shoot as well as him—but not better. (Remember: Stroke his ego!) You’ll need those skills when hiding from the Feds—and he’ll come to see how he can’t live without you.

She said yes! After his #LastRun prior to Senior Day, Daniel Stone proposed to his girlfriend! #ClemsonFamily https://t.co/2w5R2xKgij

8) Remind him that a husband and wife can’t be compelled to testify against each other!

Photo via Josh Sherrill/Flickr (CC BY 2.0)