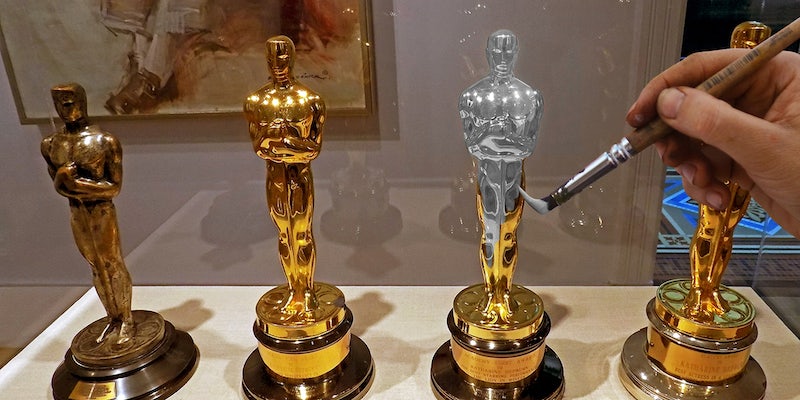 They could change the color of the statues, for one.

We all know that the Academy Awards—which will be presented on Sunday, Feb. 28—are having a very white year. Thus the enduring hashtag of the season: #OscarsSoWhite.

But in all the thinkpiecing on the subject, we’ve lost sight of a crucial question. The 2016 Oscars may be white, but are they white enough? Of course not. Let us count the ways:

1) There isn’t a white host

Don't do this Chris…. Please bro… This isn't the way… RT @chrisrock: The #Oscars. The White BET Awards.https://t.co/kAEp9h23Cj

All the nominees for acting are white people, so why is it that Chris Rock, a non-white person, is the master of ceremonies? Was Billy Crystal not available? Steve Martin unwilling to host? Ellen DeGeneres too busy dancing for her studio audience? In 2002, both Halle Berry and Denzel Washington won trophies as Sidney Poitier took home an honorary Oscar. You know who hosted that year? Non-white person Whoopi Goldberg, that’s who. Given that it’s 2016 and Oscar diversity has regressed about 60 years, the show’s host should match its melanin-deficient nominees.

Adele has said no to Oscars organisers https://t.co/m9JwE9jU50

Although she’s not nominated for anything, white people love Adele, so her being at the Oscars would’ve upped the white factor.

3) Mark Ruffalo will be there

Don't forget, Martin Luther King was an activist and loathed by the establishment. Activist is not a dirty word. #SunlightRevolution

Mark Ruffalo is one of the few white actors who could be classified as “woke.” He’s not afraid to talk about issues regarding race, he tweets about racial injustices going on all over the world, and he even considered joining Spike Lee and Jada Pinkett-Smith in boycotting the Oscars. A white man so unpredictable has no business being at a ceremony where mostly predictable white people will be in attendance.

Since 1979, Merly Streep has been nominated for an Oscar a record 1 million times. She is arguably the best white actress alive, and it makes no sense that she wasn’t nominated this year. As recently as this fall, she was in a movie called Suffragette, starring Helena Bonham Carter and Carey Mulligan. This movie was literally created for a Meryl Streep nomination.

Oscar voters are 94 percent white, which is a travesty beyond comprehension. Instead of throwing minority voters a 6-percent bone, they might as well make the Academy 100 percent white so that nobody will be surprised when only white people are nominated for anything. This is such a no-brainer.

As always, the iconic Oscar statuettes will be gold in color—not white. A huge missed opportunity.

Leonardo DiCaprio will be happy. The Official 3D Printed Oscar Statuette is a 1929 Throwback https://t.co/t9Jc3xIZuA pic.twitter.com/P0Y9IzHPnX

7) Idris Elba will not win for Beasts of No Nation

Although technically not white, if Idris Elba won for his intense performance in this Cary Fukunaga-directed drama, he would’ve been on the fast track to play James Bond, which would’ve pissed off racist people in the Academy, making the Oscars even whiter in 2017. This sort of thing usually happens in years when the focus isn’t on Jennifer Lawrence, Leonardo DiCaprio, some other Caucasian, etc. Let’s face it: The Academy is going to have to do a lot more to ensure that future broadcasts of the Oscars are just as white and boring as they’ve been since 1929.