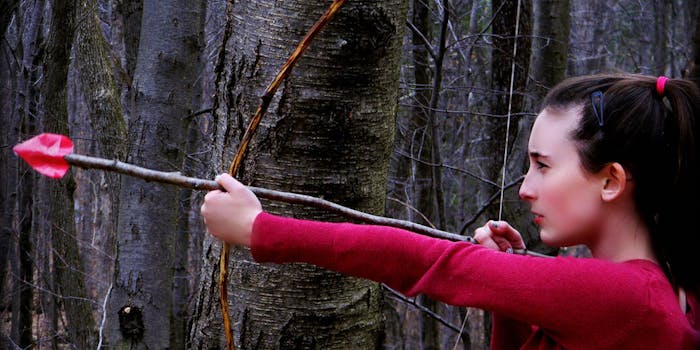 Knowing any given handful of transgender people doesn’t make you an expert on all of them.

We’ve always known that OkCupid is full of overt assholes and predatory “nice guys” but as more and more transgender people use the service, we’re starting to learn that it’s full of transphobes as well. Transgender people, especially transgender women, regularly receive abusive messages if they choose to disclose their transness on their profile.

The transphobia on the service is so rampant, in fact, that OkCupid feels the need to warn people (in the bottom of Privacy Controls) that they should not try to delete transgender people from the service by reporting their profiles. This clarification is probably necessary because many people like this Reddit user want OkCupid to force every transgender user to mark themselves—but don’t worry, he has “nothing against gender identities.”

Despite the human hazards, transgender people, like anyone, can still find love (or at least some halfway decent drunk texting) on OkCupid. If you’re not an asshole and you think of yourself as the kind of person who’d be open to meeting a transgender person on OkCupid, here are some things to avoid saying during conversations with your transgender romantic prospect:

OkCupid already asks every user this question the moment that they sign up. You don’t need to follow up with your love interest to make sure that they answered it correctly. Think about what you’re really hoping to find out by asking this question and whether or not it’s an appropriate thing to ask (hint: it’s not).

But most folks who ask a question this inane don’t understand what being transgender means in the first place, so if you’ve successfully passed Trans 101, please move onto the remaining pieces of advice.

If you’re the sort of person who requires an immediate answer to this question, you probably shouldn’t date a transgender person anyway. And if you’re truly interested in opening up your dating pool to include transgender prospects, you should probably resolve yourself to be open to any genital configuration because every transgender person’s relationship to their genitalia is different.

While many transgender people want to undergo some form of genital surgery, bear in mind that genital surgeries are prohibitively expensive and that they are not covered by most health insurance plans. In the case of transgender men, too, phalloplasty techniques have not yet reached a point where most guys would want to shell out the cash for it. Financial and medical obstacles aside, not every transgender person even wants to alter their genitals to match societal norms.

By asking about a person’s genitals before you even know what their favorite movie is, you’re broaching an incredibly complicated and emotionally charged subject with all the cavalier disregard of an episode of Family Guy. (Extra tip: if Family Guy is listed as one of your favorite shows, you’re not likely to score big with transgender people on OkCupid.)

There’s definitely a time and a place for conversations about genitals. If your OkCupid flirtations and in-person interactions are reaching a point where it seems like pants and/or skirts and/or dresses might start coming off in the near future, it might be nice to know what to expect from a purely logistical perspective (e.g. “What kind of toys and/or protection should I bring?”). This is a conversation you should approach as sensitively as possible, following the lead of your potential partner.

But if you know that you might end up disqualifying your romantic prospect if you get the “wrong answer,” do everyone involved a favor and take yourself out of the running before that conversation takes place. No one wants to feel like they’re a good match for someone before getting disqualified for a technicality.

3) “Why don’t you mention you’re transgender on your profile?”

Many transgender people on OkCupid decide to save themselves a great deal of trouble by including a notice on their profile indicating that they are transgender. Most people include this disclaimer not because they want to advertise their transness but rather because they want to filter out all of people who will reject them for it. The fact that many transgender people feel these disclaimers are necessary speaks to the immense difficulties and dangers that they face in the world of dating.

That being said, some transgender people choose not to disclose their transness on their profile. If you want to date a transgender person, you have to recognize that this choice is their prerogative. For many transgender people, a gender transition is just another thing that happened to them, perhaps even a long time ago; for them to tell you about their history of transition would be about about as relevant as you giving them a list of every car you’ve ever driven. It’s not your business to know and you shouldn’t insist that it is.

I believe that the scientific term for this sort of statement is “complisult.” People who say this usually believe that they’re just letting their love interest know that they’re handsome or they’re pretty. But this statement carries with it the connotation that being able to tell that someone is transgender would be a bad thing.

By saying that you “wouldn’t be able to tell,” what you’re actually doing is policing gender lines based on normative ideas about ideal ways of appearing to the world. You’re essentially saying, “In my mind, a good-looking man should look like this and you, my transgender friend, are doing a really great job at looking like a good-looking man.” See how bad that sounds once you strip away the chipper, faux complimentary tone?

Keep in mind that people are people, not puppies to be patted on the head for looking so cute. Transgender people receive enough societal messages telling them that they’re ugly. Please don’t treat them as if they are starting out from a disadvantage in terms of pleasing you visually. Try normal human compliments instead like “you have pretty eyes.”

5) Any question that you are able to Google.

You should know that transgender people spend an inordinate amount of time educating dozens of people–everyone from their family members, to their therapist, to their boss–about transgender issues. OkCupid asks people enough useless questions as it is; let your transgender prospect be and satisfy your intellectual curiosity elsewhere.

How much does phalloplasty cost? Here, let me Google that for you. How many transgender people are there? I know someone who can answer that question for you and her name is Google. By taking advantage of Google, you can keep your conversation with your potential match free of stuffy exposition; use the time instead to ask them truly important questions like, “Twin Peaks: great television show or greatest television show?”

While everyone’s different, the vast majority of transgender people run the hell away from comments like this. Most transgender people want to be romantically appealing for the same reasons as everyone else: because they’re smart or they’re funny or they’re interesting or they have a killer smile. Fixating on the idea that a person is transgender reduces their entire personhood to a single fact about themselves, a fact that, in all likelihood, is much more important to you than it is to them.

Let’s put it like this. Focusing on a transgender person’s transness is like inviting a friend who lives across town to have lunch with you and then spending the entire lunch obsessed with their trip across town. “I’m so glad you took that bus here, Karen. Did I mention that I think it’s really cool that you took the bus here?” Does it matter how your love interest got to where they are? What other qualities do they have that you might ignore if you zero in on their gender assignment at birth?

Statements like these make you sound a little too eager to establish your credibility with your new transgender love interest. Transgender people are not trophies or merit badges or Pokémon or collectible action figures (although it’s about time for Laverne Cox to get the deluxe figurine treatment). Just as you shouldn’t use your transgender friend as a fountain of free knowledge, you shouldn’t rush to show off the knowledge you’ve already acquired either.

These sorts of statements also send an implicit message that all transgender people are the same and function in the same way. By rushing to say, “I’ve dated a transgender person before,” you’re essentially also saying, “therefore, by the transitive property (har har), I’m more than capable of dating you.” There are over 700,000 transgender people in the United States alone. Knowing any given handful of transgender people doesn’t make you an expert on all of them.

Transgender people on OkCupid have to spend a lot of their time separating the wheat from the chaff, blocking abusive users while carefully managing conversations with folks who seem a little too curious. Educating yourself and avoiding the above “red flag” comments and questions will help to create a more welcoming conversational environment in which your budding romance with your transgender match can flourish. And who knows? Maybe in due time, you can spend your typical Friday nights together and become one of each other’s six things you can never do without.