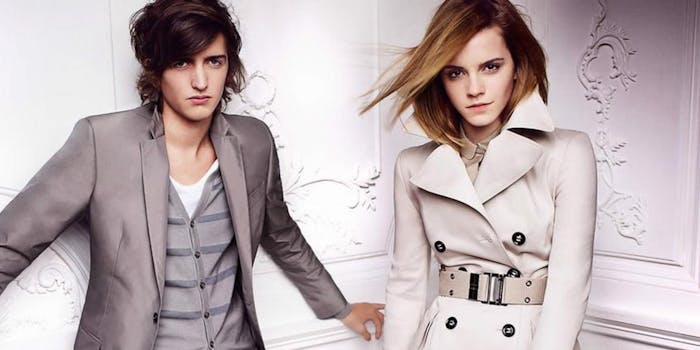 4chan shouldn’t be the reason you’re a feminist

In the immediate aftermath of Emma Watson’s brilliant pro-feminist speech to the United Nations this past weekend supporting the HeForShe campaign, the actress was met with rousing support worldwide. What she was also met with? A threat, supposedly issued by users of the notorious message board 4chan, to leak nude photos of Watson on a website featuring a countdown clock set to expire at midnight on September 24.

However, as midnight came and went, the site didn’t leak nude photos of Watson—instead, it redirected to a website for a supposed social media marketing firm, Rantic, claiming that the site was created by “celebrity publicists” to ultimately shut down 4chan, through the flimsy argument that by threatening to leak nudes, attention would be drawn to the vileness that is 4chan. While little information is available on Rantic, it’s important not to miss the point here: Even if 4chan wasn’t behind this, do we really need a shadowy villain to demonstrate just how bad women have it?

I have little sympathy for Rantic, whomever they are, and I highly suspect that their site was actually created by a cabal of entertainment publicists who decided to use Watson as a temporary scapegoat to further a cause. But let’s suspend belief for a moment and say that their misguided brand of internet vigilantism was well-intentioned (if not poorly executed). Did we really need it?

As feminist blog Jezebel was the first to point out, while it’s difficult to muster sympathy for 4chan, the message board known for its recurrent trolling and rumored leak of the first wave of naked female celebrity photos earlier this month, it was more than likely they weren’t behind this. They denounced the Watson nude leak site almost immediately, and the corollary between the release of Watson’s speech and the birth of the site is coincidental to be sure, but not nearly damning enough to serve as proof.

And yet multiple outlets, viewing 4chan’s logo pasted onto the Watson nude leak site, reported the site as work of 4chan sans fact-checking, as if to underscore their original point that an outspoken feminist would almost certainly draw ire.

Jill Filipovic at Cosmpolitan wrote about the alleged 4chan retaliation against Watson when the site first went up, and though her piece was predicated on the knowledge that 4chan was behind the site (and to be fair, though 4chan denounced the page, commenters on their page were more than overjoyed that the photos might have existed), even her explanation underscores just how badly women have it—especially those that are public figures.

Attacking outspoken women by sexually degrading them is nothing new, and using naked photos to take celebrities down a peg or two is quickly becoming the go-to method of sexists across the Internet. Emma Watson exists at the unfortunate intersection of those two trends: She’s a woman who’s speaking up for feminist

And things are that bad. Filipovic isn’t wrong for a second, when she talks about how bad women have it—especially when they dare to speak out. Neither was Amanda Hess, when she wrote about why the Internet isn’t safe for women. Neither was I, when I wrote about it for this site, just a few weeks ago.

And those are just articles I thought of off the top of my head, because there have been tons of great articles lately about just how tough it is to be a woman, all of which are helping further the cause of gender equality, but all of which starkly display just how far we have to go before we can even be in the neighborhood of “close.” And the fact that there’s such a gap between where we are, and where we should be—a gap that was further demonstrated in Watson’s pitch-perfect speech—is no secret. So if we’re all aware of how much work needs to be done, why do we need the presence of a villain, just for the narrative to be sticky?

A villain is great—a villain unites us to rally behind a cause, because it’s far easier to rally when you have something to rally against. And in this instance, a villain that already has a history for malevolence, as 4chan does? Even easier!

I’m not here to argue for due process for 4chan, a group that garners little to no sympathy from me, but internet vigilantism, in this instance in the name of feminism, isn’t helping the cause. I’d even go so far as to argue that it’s hurting the cause. Sure, the alleged 4chan leak gave Watson’s buzzy speech extra lift, as both men and women were quick to rally around her protectively, but all it does is reinforce the damsel-in-distress narrative—and that’s a narrative that feminists aren’t pushing.

Moreover, by using the alleged Watson nude leak as a reason to be mad, it’s pulling in supporters for the wrong reason. Sure, you hope they come for the temporary indignation, and stay on lifelong to fight the cause.

However, the reason gender equality hasn’t come nearly as far as it should have, is because people who don’t believe in it usually aren’t monsters—they just think those incidents are few and far between. When Ray Rice was suspended, it was still easy for NFL fans to assuage their guilt of supporting the NFL, by assuming it was a one-off. Then Ray McDonald beat his pregnant girlfriend. Then Greg Hardy’s assault charges came back to light. Then Adrian Peterson’s child beating rap came up.

And even though the list keeps growing, NFL apologists still want to look at those incidents as isolated. Similarly, by rallying around Watson because she gave a good speech is great, but the outcry that grew because 4chan might have been retaliating for her bold stance? That feels no different than other types of hashtag activism that may quickly fall by the wayside, once the indignation of her alleged nudes being released wore off. Remember KONY2012?

Feminism has been a buzzword moreso now than it ever has before—something the widespread outcry over the Celebgate nude leaks has proven. In years past, when individual photos of stars such as Scarlett Johansson or Vanessa Hudgens leaked, they were dismissed as the penance those actresses paid for sharing their bodies even privately, and not seen as a sexual crime against women. We’ve come a long way in a short time for such leaks to be seen as what they are: a crime against women.

Yet for me, as a woman and a feminist, focusing on finding a villain in this narrative just splits my focus. Instead, I’d rather take a page from the Watson playbook and seek to educate men and women, those who likely do support the inherent mission of gender equality, but view feminism as the other F word—rather than engage in the Sisyphean task of finding a one-off villain to blame. There are already too many battles to fight on the Internet without unnecessarily adding to our plates.